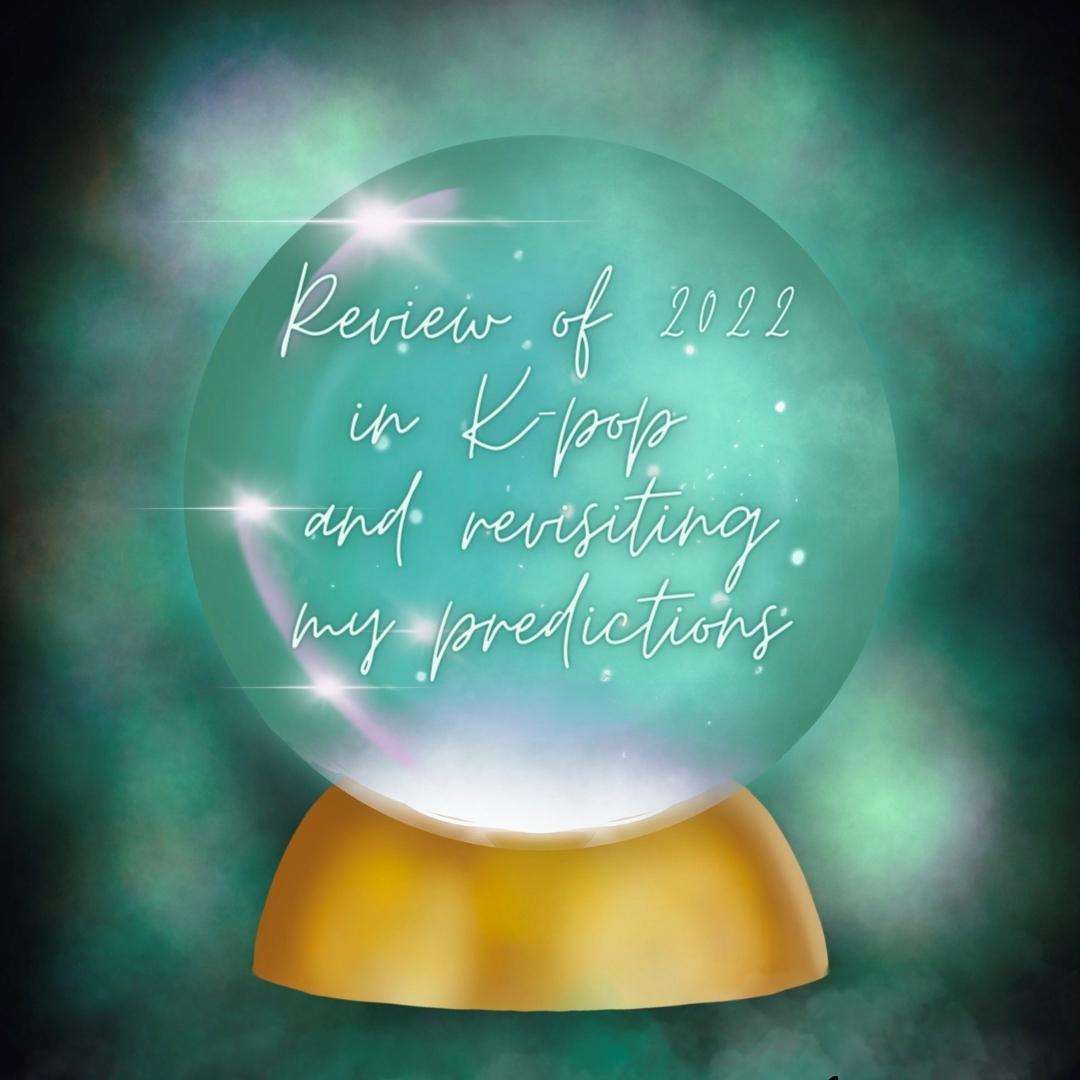 The year 2022 has gone fast, and so many things happened in K-pop! So it is a good time to go through what happened in K-pop in 2022. I’ll go through some of the trends and happenings in K-pop this year here. In this text and at the end of this post, I review the predictions I made last year in December, how they came true or if they didn’t.

2022 was a year of the girl groups as they dominated the charts and record sales in South Korea and overseas. Some new girl groups debuting were at the top of the charts immediately when they released their new EPs. For example, HYBE Labels, came out with two new girl groups that had many hits this year: LE SSERAFIM (“Antifragile“) and NewJeans (“Hype Boy“). Also, we had big hits from IVE, which had debuted in December last year, 2021, having hits like “LOVE DIVE” and “After LIKE“. And let’s remember Nmixx, which also debuted and gained popularity with singles “O.O” and “DICE”.

Also, if newcomers made big hits, we had hit songs coming from other girl groups that have been in the game for longer. For example, (G)I-DLE had top hits with their “TOMBOY” and” Nxde“. We also got successful comebacks from aespa with “Girls“, Blackpink’s “Pink Venom“, and “Shut down“, TWICE “Talk that Talk“, and ITZY’s “Sneakers“, to mention a few examples. Other girl groups that debuted this year and got exposure with their songs were, for example, H1-KEY (“ATHLETIC GIRL“), Kep1er (“WA DA DA“), VIVIZ (“BOP BOP!“), mimiirose (“Rose“) and tripleS (“Generation“).

2. Finally, live concerts and tours on a big scale

This year we again got concert tours and live concerts more than for a while after the worst covid-19 years. This was in my last year’s predictions list, as it was apparent if nothing drastic happens. K-pop groups and artists had more extensive tours again in South Korea and abroad, which was a relief for the artists and also fun for the fans.

There were also K-pop festivals again after many years. For example, in Europe, we had K-POP.FLEX in Frankfurt, Germany, in May; there was MIK festival in July, and HallyuPopFest in August, in London, UK. I attended two of these festivals, and I have festival blog posts of them if you are curious about how they were. MIK festival will come back in Paris from 18th to 19th February 2023, with performers like CL, Pentagon, KARD, CHUNG HA and BTOB, if you are interested.

Also, big news and talking topic this year has been BTS going to the military, and BTS informed about their hiatus starting this year. BTS fans, the ARMYs, have received luckily many song releases from the members after the announcement. There are monthly releases and projects from the BTS members, which is great for the fans while waiting for the comeback of the group. There was a massive concert in Busan this October, concerts in USA and Seoul this year, and the release of their anthology, “PROOF”, which included three new songs. So, a lot happened this year, and it will be great to see what is coming in 2023.

2022 was also a year of comebacks for groups that released music after a long break. And the fans had waited for years, so this was great for the music fans. For example, the girl group, Girls’ Generation released an album, “FOREVER 1”, with a pop title track of the same name. Their previous album, “Holiday Night”, was from 2017, so it was awaited comeback. A second big comeback of the year was from the boy group BIGBANG with their pop ballad song “Still Life” in April. This might be their last BIGBANG release because the members seem to be separating into different record labels when I’m writing this. Also, a surprising comeback single came from Wanna One, as they performed a new song in the 2021 MAMA awards, and they released a single in January 2022, “Beautiful (Part.3)“, which was the performed song.

We got a comeback also from the girl group KARA “When I Move“, from their EP called “Move Again”. This was their 15th-anniversary release, and they also performed at the 2022 MAMA Awards. KARA released their music in 2015, which has been a long time. Also, Psy, who had his massive global hit, “Gangnam Style“, had a new album released this year with the playful and fun pop song “That That“, which was produced and featured SUGA from BTS. It’s fun to hear new music from artists who have been in the industry for a long time, and hopefully, we will also get exciting comebacks in the future!

One of the serious topics that surfaced this autumn was the case of the boy group OMEGA X’s horrific situation and the legal situation of their contracts. For a long time, K-pop fans have been concerned about the working conditions of idols. As idols are so hard working and give everything to succeed in their careers. Although such life can be exhausting and hard. As many of the groups’ idols can also be very young, they need adults and professionals helping them as much as possible with the contracts and all the things related to idol life. I am not an expert on the working conditions of K-pop, but this is an important topic that resurfaces in discussions with other K-pop fans. As a K-pop fan, I hope for a healthy and wealthy career for all professionals.

My last year’s predictions – did they come true?

Last new year, I made five predictions for the year 2022, and a few of them came true. The first claim was that rock is back. Rock was one niche music style this year, so it was a slight trend in K-pop, but not massive. And we did get some rock songs in K-pop like the (G)I-DLE’s “TOMBOY“, TXT’s “Good Boy Gone Bad”, and WOODZ’s EP “Colorful Trauma” this year had rock and pop rock songs.

The girl K-rock band Rolling Quartz released a few EPs and single’s this year, with title tracks “Holler” and “NAZABABARA“. We also got a rock boy group called Xdinary Heroes from JYP Entertainment. They released songs “Test me” and “Hair Cut” this year after their debut last December. Also, we got comebacks from the rock-style girl group Dreamcatcher, with “MAISON” and “VISION“. Their music is more pop-style, with rock elements, heavy metal guitar sounds and a rock beat.

But what was big this year, and you could hear it a little last year. My prediction was the 90’s style of music is coming back. For example, we could hear this in the New Jeans’ music, as they debuted this year. Their songs “Attention” and “Hype Boy” are modern productions, but they have inspiration taken from 90’s pop music. Many songs in my highlight posts this year mentioned the style of that era. Also, we saw the 90s and Y2K aesthetics in 2022 in so many K-pop music videos that it was a trend.

My prediction of mixed girl and boy groups didn’t come true. But we have a fun mixed group and song from SM Entertainment, with KAI, Seulgi, Karina and Jeno, called “Hot & Cold” for this Christmas. Maybe we will get more mixed groups someday!

Also, I had in my predictions the new technology and K-pop: mentioning metaverse, music NFTs and blockchain. This prediction has yet to become as mainstream, and it remains to be seen what in the future will happen. For example, this year, there was a fan meeting in the metaverse, and possibly this kind of activity will continue to grow in the future as big entertainment companies invest in technology. Also, we saw a virtual AI signing for an entertainment company. This raises the question, will there be virtual idols in the future? I prefer real human artists 😊

Summing Up 2022 and predictions

So here is my short recap of 2022 and some topics to discuss. How do you think the predictions were? I think I did okay with the predictions. Some of them came true 😊 I am still deciding if I’ll make a prediction list for 2023. The predictions are fun to list but also difficult to think about!

A lot of good music came out in 2022. I still have my December highlights post at the start of January 2023. So I’ll be adding new songs to my playlists still. And new lists are coming next year. I think I’ll continue the highlights series every month still. Maybe I will make the text a little bit shorter because I would love to post more often. I also aim to post more on my Youtube channel K-pop-related videos.

Here are my playlists for you to check my favourite K-pop songs of 2022:

How did your year go, and what did you do? I hope you had a fun time and achieved your goals! The year 2022 was for me full of work and interesting trips. So I am content with what I was able to do. Doing this monthly blog and festival reports, learning music production, and visited Germany, UK, Estonia and South Korea (wow!) and managed to do my normal day job. Phew, a lot of things! But I have new goals for 2023: so I have to work harder on those goals I want to achieve.

Thank you for reading my blog post/posts – I appreciate that you are here! Hopefully, you get inspiration and ideas from these blogs and learn more about K-pop. I hope you had a relaxing Christmas and have a great end of the year 2022! 😊