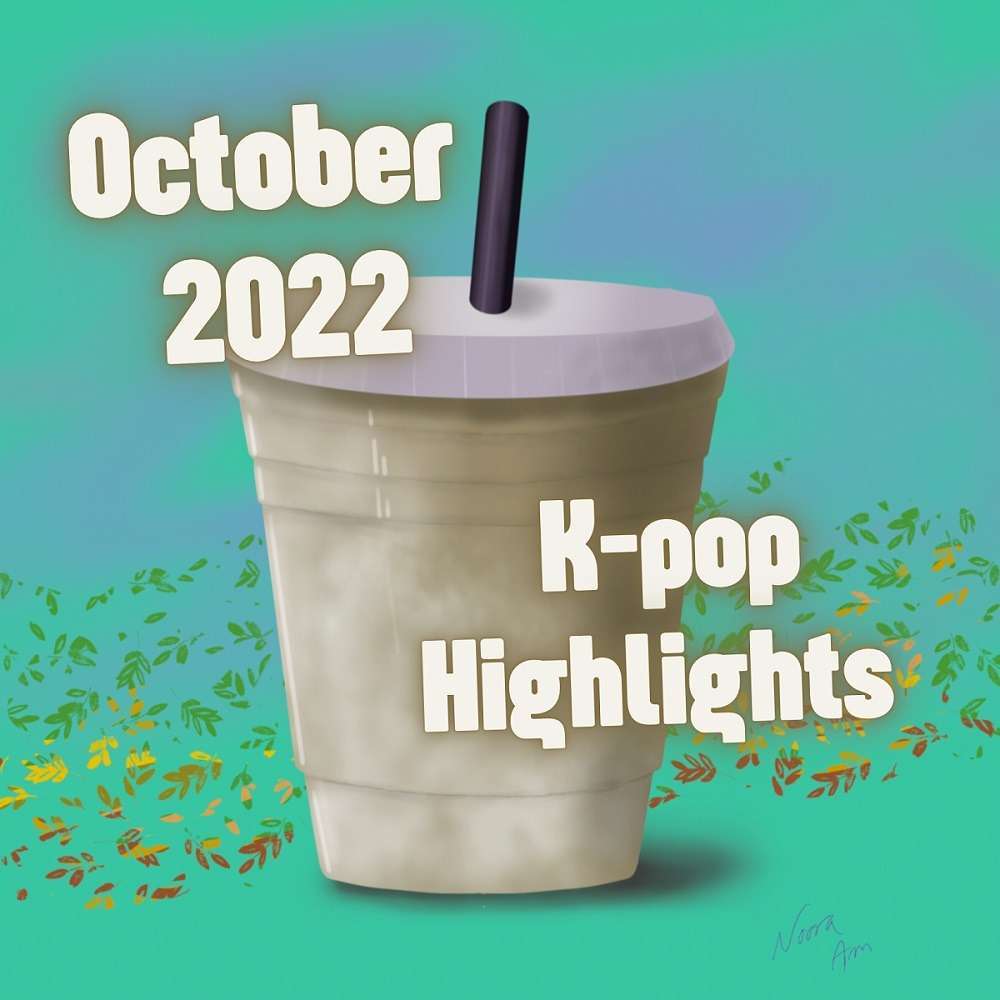 Hi there, and how are you? It’s time for the October highlights. I returned from South Korea about a week ago, and it feels surreal being back home. I already miss South Korea and its people! Being away from family and friends at home and my work and colleagues was hard, so it’s also nice to be at home. But honestly, I didn’t want to return because I felt at home there, too, in a weird way. I liked the pace of life, the culture, food, and I have only good things to say. So, I truly enjoyed my stay there! In September highlights, I posted some photos from the trip, so check that out.

I am in shock here because Finland and Helsinki, my hometown, are quiet places and it’s raining and cold… It’s a big contrast. If you come to Finland, I recommend coming in the summer months from June to August. Then it is okay 😊

I have to address a heavy topic that happened in October in Seoul. In Itaewon, one of Seoul’s popular areas for going out, 156 lives were lost in a crowd crush on 29th October. I am genuinely shocked about this happening. We were visiting Busan that weekend and heard the worrying news before going to sleep. I will dedicate this month’s highlights to the memory of those who passed away. My deepest condolences to the friends and families who lost their loved ones in Itaewon. So many lives were lost too early.

LE SSERAFIM, a girl group with five members, released their second mini album, “ANTIFRAGILE”, in October. LE SSERAFIM’s first EP, “FEARLESS”, was released this year, and it was very successful with its release of the title track “FEARLESS“. The highlight song, “ANTIFRAGILE“, is a 90s-style pop song with a reggaeton beat. The first time I heard the track, I needed convincing. But I heard it a second time at a record store in Seoul at a louder volume, and it sounded so groovy that I decided to return to the song again.

The song has excellent vocal hooks; although it is so simple, it is catchy! The dance choreography is perfect for a retro-futuristic music video. It shines the best with the music video cuts and looks cool.

I enjoyed the whole EP also a lot. “Impurities” is a very 90’s style pop song, with beautiful vocals and an R&B style music production. It sounds fresh to hear this 90s style, which brings to mind SWV and other girl groups from the US of that era. The next song on the EP is a 2000’s pop-rock song in the same style as Avril Lavigne and Kelly Clarkson: “No Celestial”. The last song is a slow pop song, “Good Parts (when the quality is bad but I am)”, reminding me of MAMAMOO’s songs in style and vocal melodies. It is evident that the style of LE SSERAFIM leans a bit on nostalgia when it comes to musical styles, and their songs have timeless melodies. So, music is pleasant for many generations to listen to. You can watch a documentary series of LE SSERAFIM’s journey on Youtube: “The World is My Oyster”.

Wrapping up Proof-era: BTS in Busan, Online and Offline concert “Yet to Come in Busan”

At the start of October, a special event was BTS’s concert in Busan, “Yet to Come in Busan”. The event was made to help the city host the 2030 World Expo. The show was held at Busan at the Asiad Stadium to about 50 000 people. So, a big event! In addition, the concert was aired through Weverse (now on Youtube) for free for everyone to enjoy online. I watched the show online in Seoul. I didn’t have tickets to this concert because I was supposed to come to South Korea a week later, but my plans changed. This was the chance to see BTS together, a concert with all the members, in a long time.

The concert was over a two-hour show with a live band, starting with fireworks and BTS classic “MIC Drop“. The upbeat vibe continued with “Run BTS” from their “PROOF” anthology. This has superb dance choreography, and BTS just released a dance practice video. After that, we got into calmer songs: “Run“, “Save Me“, “00:00 (Zero O’Clock)”, and “Butterfly (prologue mix)”. Next, it was time for more up-tempo songs like “UGH!” and “BTS Cypher PT.3: KILLER” with the BTS’s rap line, SUGA, RM and J-Hope. After this, we got to enjoy newer hits like “Dynamite“, “Boy With Love“, and “Butter“.

Next up were older songs like “Ma City“, which referred to Busan, Jungkook’s and Jimin’s hometown. “Dope“, played as a rockier version live; “FIRE“, which is an absolute classic in BTS’s discography; “IDOL” where we saw numerous dancers with BTS on stage. And for the last song, we heard “For Youth” from the “PROOF” -anthology. Lastly, it was time for the encore. BTS wrapped up the concert with the beautiful “Spring Day” and the newest single, “Yet to Come (The Most Beautiful Moment)“. The show was excellent, with the vast setlist and with the energetic performance. Therefore this was one of the October highlights for me.

N.Flying released their eighth mini-album called “Dearest” in October, and they are a five-piece band. This release was their first in twelve months, and the band has been together for almost a decade. So they already have a lot of releases and hits like “Rooftop” from 2019. The song I picked here is “The Night“, a slow pop song that builds up to the chorus. The song has some beautiful melodies and vocals. That’s why I picked this as one of the highlights for October. The song has a hopeful atmosphere, and I find this song very calming.

“HELLO” is from TREASURE’s second mini album, “The Second Step: Chapter Two”. The song is an upbeat pop song with some EDM sounds. At first, I wasn’t a big fan of this song, but then it played in various places in Seoul, and it stuck to my head, and I started appreciating the cheery style of this song. The chorus is catchy here, and the track has some charming melodies. The chorus is a super cheerful sing-along. This song’s style sounds like pop from the 2010s, but I need help pinpointing why this song sounds so familiar. But this reminds me of Pitbull and that sort of party music with particular EDM sounds – if you remember 😊

This song has a fun dance choreography, which is undoubtedly exhausting with all the jumping, but looks great! The group has some great songs in their discography, for example, “BOY” from 2020, which is my favourite. TREASURE is a 10-piece boy group: YG Entertainment announced on 8th November that Bang Ye Dam and Mashiho are departing from the group. This is relatively recent news from TREASURE.

How did you like October’s K-pop, and did you find good songs on your playlist? You can check out my Spotify playlist of songs in 2022. I have gathered all the October highlights and songs I enjoyed this year into the playlist. These are my personal opinions, and they constantly change as I discover good music all the time.

The biggest highlight for me last month was seeing my favourite artist, Ha Sung Woon, at the Someday Pleroma festival on 9th October. I have a review coming about the festival soon, so look out for that! I also have Woodz and Heize on that review – the festival vibes, tips for buying tickets etc. You can already check out my short Instagram reel of some of the festival moments from Sunday.

This month’s picture is a cafe latte because I drank those every day during my trip. Koreans know how to make good cafe lattes, and my favourite was a vanilla latte!

Another personal highlight of last month was seeing KARD live at the MU:CON 2022. You can watch a short video I made on my Instagram, and I’ll be posting about day 1 of MU:CON 2022 performances this autumn here, too, on my blog. And we also went to the Awesome festival in Seoul! There were a lot of hip-hop artists, so look out for that review, too, if you’re into hip-hop. And if you’re into NCT 127, I have a review of Seoul’s Sunday concert coming at some point. That was an incredible experience at the Olympic Stadium! So, I’ll keep posting different music-related content here for the coming months 😊

I’ll also do some videos and posts about my trip, how it went, what I experienced, etc. I have planned several topics before my holiday that I want to write and do videos about. So, now I have a lot of material, which needs some editing and processing 😊 These will probably be on my Youtube account.

I hope you enjoyed this post, October K-pop highlights, and I can’t believe we are almost at the end of 2022! I wish you a fantastic day, and be inspired!