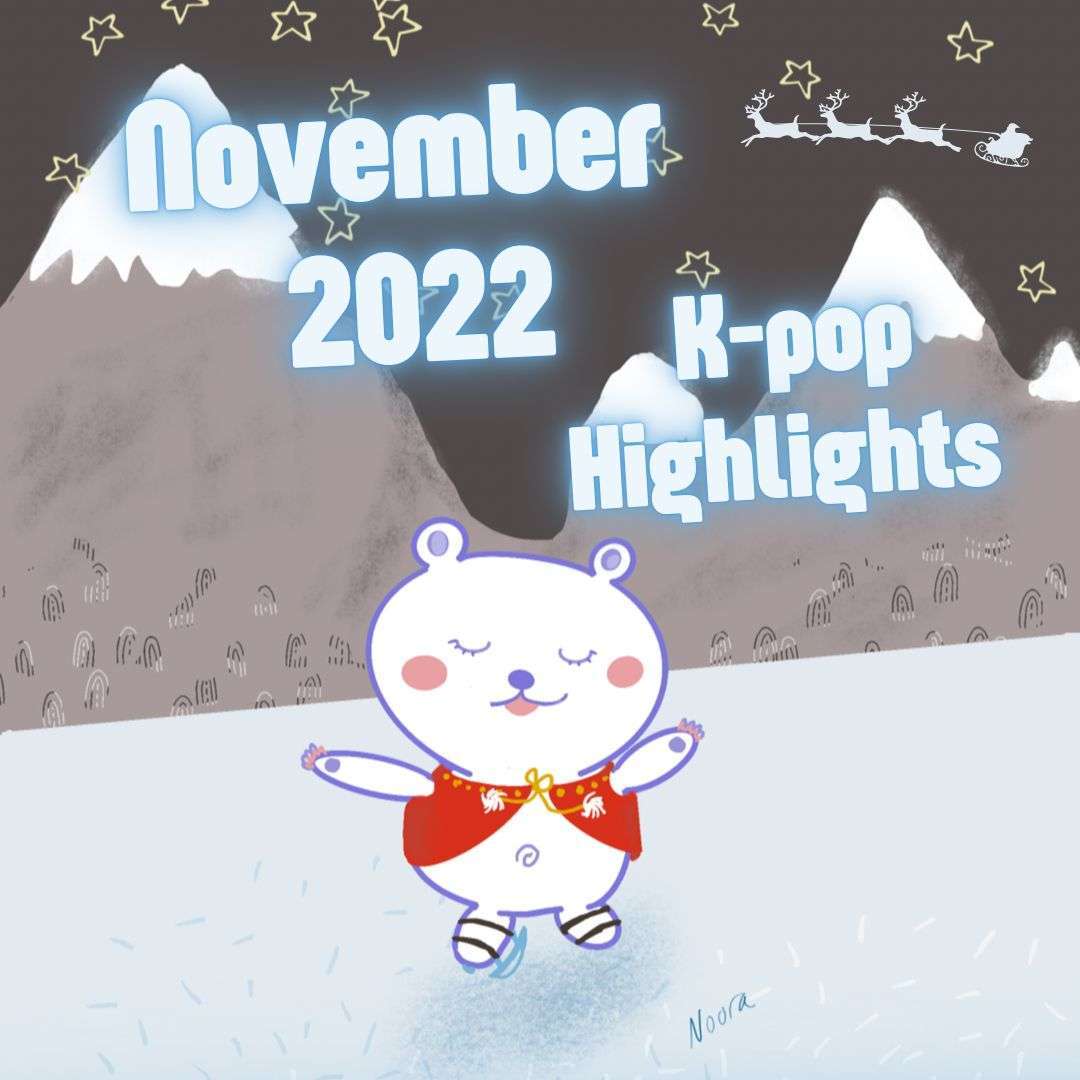 It is time for some K-pop highlights for November! How are you and are you waiting for Christmas time? In November, there was a lot of new K-pop to listen to. So, I picked here the songs that caught my attention. These are my personal preferences and opinions: these songs just had that something that made them stand out from the other music. As there was a lot of new music in November, I will probably discover more great songs from this month still this month or start liking songs after some time has passed. This often happens to me, so I usually try to listen to songs several times.

It is the end of the year, and Christmas is coming soon, so it is time to review 2022. The year-end music awards have already happened at the end of November for K-pop. For example, the MMA 2022, the Melon music awards, held by the Kakao company. And MAMA 2022, Mnet’s Asian Music Awards, was a two-day event this year in Osaka, Japan. What were your favourite K-pop songs in the year 2022? I’ll be making some decisions soon: it will be challenging because there are so many great songs this year. So, my top songs are coming to this blog at the start of January after the December highlights 😉

Also, we have some football going on as I’m writing this. There have been, unfortunately, problems with this year’s World Cup being built and prepared. But besides that, I have been enjoying watching the matches a lot. Especially South Korea’s team just won their game against Portugal and ended up going to the playoffs, which is fantastic! The team played so well! Of course, there is a K-pop connection to the World Cup, as Jungkook from BTS sang and performed the song “Dreamers” in the opening ceremony. This song is your football anthem. I like the melody and vibe of this song, so I have to mention it here.

Let’s hop on to the monthly highlights! 😊

First up, we have a Korean female singer, BoA, with her comeback mini-album “Forgive Me”. BoA has a long career in K-pop and already released her first album in 2000, “ID; Peace B”. For the monthly highlight, I chose her title track, “Forgive Me“, a rock-infused pop song. The chorus has some massive drums, contrasting with the verse and bridge. You have a stark difference in the song’s parts.

This song reminds me of late 90’s and 00’s pop songs. BoA’s voice changes from soft to powerful, which makes a great contrast in this song’s different parts. Also, the middle8 section is excellent, and the track is a pleasing cohesive entity. Also, we get the K-poppish vocal “rapping” ending here, which sounds cool in a small amount.

I also listened to BoA’s new EP: some excellent songs. “ZIP” is a calm and mysterious-sounding pop song with a nice ongoing guitar riff. “Sketch” and “Breathe” are upbeat, cool pop songs, and “After Midnight” is a slower, jazzy tune. Last we got “Hope”, which has acoustic vibes. A charming collection of good songs is here that I recommend!

The boy group VICTON is back with their eighth mini-album, “Choice”. The six-piece group have the title track “Virus” from this new EP. This song has a hip-hop beat, and this is your quite traditional K-pop song of the moment. But, what stood out to me about this song is the excellent melodies in this one. The chorus flows well with the great vocal harmonies from the group, and this song feels like it is in balance even with the different kinds of elements. We also get a short piece of drum and bass beats in the verse with rapping.

There is also a cool dance choreography for “Virus“. There are a lot of small hand movements, which look great. I just remembered that VICTON has already been in my favourites this year in January with their song “Chronograph“. Their vocals are always brilliant, now that I think of it. VICTON might be a new favourite group for me? I must listen more. “Choice” EP is their third release this year, if I don’t count in the “You Are Mine” OST track. VICTON came out with an EP called “Chaos” in May, and the title track was a cool song called “Stupid O’clock”. So, they have released many new songs this year and are worth checking out!

The next highlight is the six-peace girl group STAYC’s single release for Japan called “POPPY“. First, when I heard this, I was a bit annoyed, honestly 😀 Then when I listened to the song a second and third time, I sang the chorus all the time, so I started liking it. But first, the song sounded all over the place, but that was probably the intention, with this song being very cheery and bouncy production-vice. The synths remind me of game music and sit well with the track. This song is fun to listen to and light-hearted once you get into it.

STAYC has also been releasing many songs this year. They released their “YOUNG-LUV.COM” EP in February, where the excellent title track “RUN2U” was one of my monthly highlights. And STAYC came out with a single release, “WE NEED LOVE”, where the title track was “Beautiful Monster“. This is also a great track with a sweet dance choreography, and the song was my monthly highlight in July. What…? I just checked the heading of my blog from July, and my heading is “Poppy and sweet, STAYC Beautiful Monster…”. Wow, what a coincidence! And this month, we have a song “Poppy” from STAYC?! 😊

Yooa is from the girl group “Oh My Girl” and has released a solo EP called “Selfish”. This is her second mini-album: she has an EP called “Bon Voyage” from 2020, which includes EDM and tropical house-inspired songs. This new EP is a stylistically different route; I like this music style more. The title track from the new EP is also called “Selfish“. The music video is very colourful and cute in the styling.

The song is a bright and happy pop/R&B song with a 90’s style in the production arrangements. It has a minimalistic production, with drums and synth sounds, leaving much room for Yooa’s beautiful voice. I put this song in the highlights because I love the minimalistic sound of this one. The middle8-part “som-som—som…”-singing is so funny! And the dance choreos too! When I heard that part of the song the first time, it was so weird, but in a good way. This is a summer song and would be great for a summer playlist.

The EP also has two B-side tracks with music videos: “Lay Low“, an upbeat, catchy pop song, and “Melody“, a song with a dreamy melody. Both of these videos were filmed in Spain. So, a lot of sunshine and a summery feeling there too. If you miss the summer – I miss it 😊

The power button on, P1Harmony “Back Down” (EP, FNC Entertainment)

P1Harmony, a six-piece boy group, is out with a new EP called “Harmony: Set In”, and this is their third EP already this year! So, they have a lot of releases this year already. I have been listening to a lot of the single release, “Gotta Get Back” (feat. Pink Sweat$); I love that song. I also loved the B-side “Bop” from the EP “DISHARMONY: FIND OUT”; that was my January highlight this year.

I chose the title track “Back Down” as the November K-pop highlight. This song sounds energetic and strong, with some guitar riffs sprinkled here and there. It has a catchy hip-hop beat and a great melody in the bridge, going then to the effective chorus. The song has a cool dance choreography with powerful hip-hop moves. P1Harmony also performed at the American “The Kelly Clarkson Show”.

I saw P1Harmony live at the MU:CON 2022 in October in Seoul, South Korea, when I had a holiday. Their performance was energetic. Their dance choreographies are great, so seeing them at a smaller venue at the Nodeul island was fabulous. It was a smaller venue to listen to the artists than bigger festivals. MU:CON 2022 had, for example, showcase gigs from different artists, groups and bands. This was a great event to check out many artists simultaneously! I have a short video on my Youtube and below, so check that one out! This was the second time I saw P1Harmony perform live because they were also performing at the HallyuPopFest 2022 in London in July, where I went. You can check out my review from my previous blog post.

Chorus, you can’t get out of your head, Nature “LIMBO!” (EP, n.CH Entertainment)

Nature released their third mini-album in November, “Nature World: Code W”. They are a nine-piece girl group that debuted in 2018. The group includes members from South Korea, China and Japan. The first time I heard of the group was their single release this year called “RICA RICA”: this song was alright, in my opinion. Still, I prefer their new title track from the new EP, “LIMBO!“. I found this song so catchy, and it is a bit all over the place as the STAYC song I described before, but in a good way too.

A lot is happening in the song’s production, and “LIMBO!” is a hectic song. But the chorus is so catchy! So that is why I chose this as a highlight. And the dance moves they have incorporated into this song are pretty cute. I also like the baseline starting the song, which gives a mysterious feeling. Nature’s vocals are great, and the chorus chant is powerful. This song has a fun group dance choreo, including the limbo dance moves and funny hair flicking 😊

Summing up this month’s K-pop

This month there were a lot of catchy K-pop songs in my highlights, but also variations in the mood/styles. What I find lovely is that there were so many favourites for this month. Sometimes I find it challenging to decide what I like some months, as sometimes there aren’t so many favourites or songs that feel special in some way.

I have a lot more K-pop favourites on my 2022 highlights Spotify playlist. There is also my Youtube channel, where I post. I am also doing short travel highlights there just for entertainment and tips whenever I have spare time. The newest is my Someday Pleroma 2022 concert vlog in Seoul for you to enjoy.

I have music projects at the moment, so there are many things to do during December, but it is so much fun. I’m making a song for my friend’s Youtube channel, so that will be great! And finally, I can talk about the project with my old friend. She made an excellent podcast series (in Finnish) about owning forest/forest keeping called “Ihmisen ääni”, which you can listen to on Spotify. Finland has many forests, and it is a big country, so some people own forests here. I did the theme tune to the podcast, so I’m grateful for that opportunity and outstanding job from Virva making the podcast! 😊 So, a lot of fun stuff is happening at the moment.

I hope you are doing great and you are healthy and happy. Have an amazing week, and be inspired! 😊