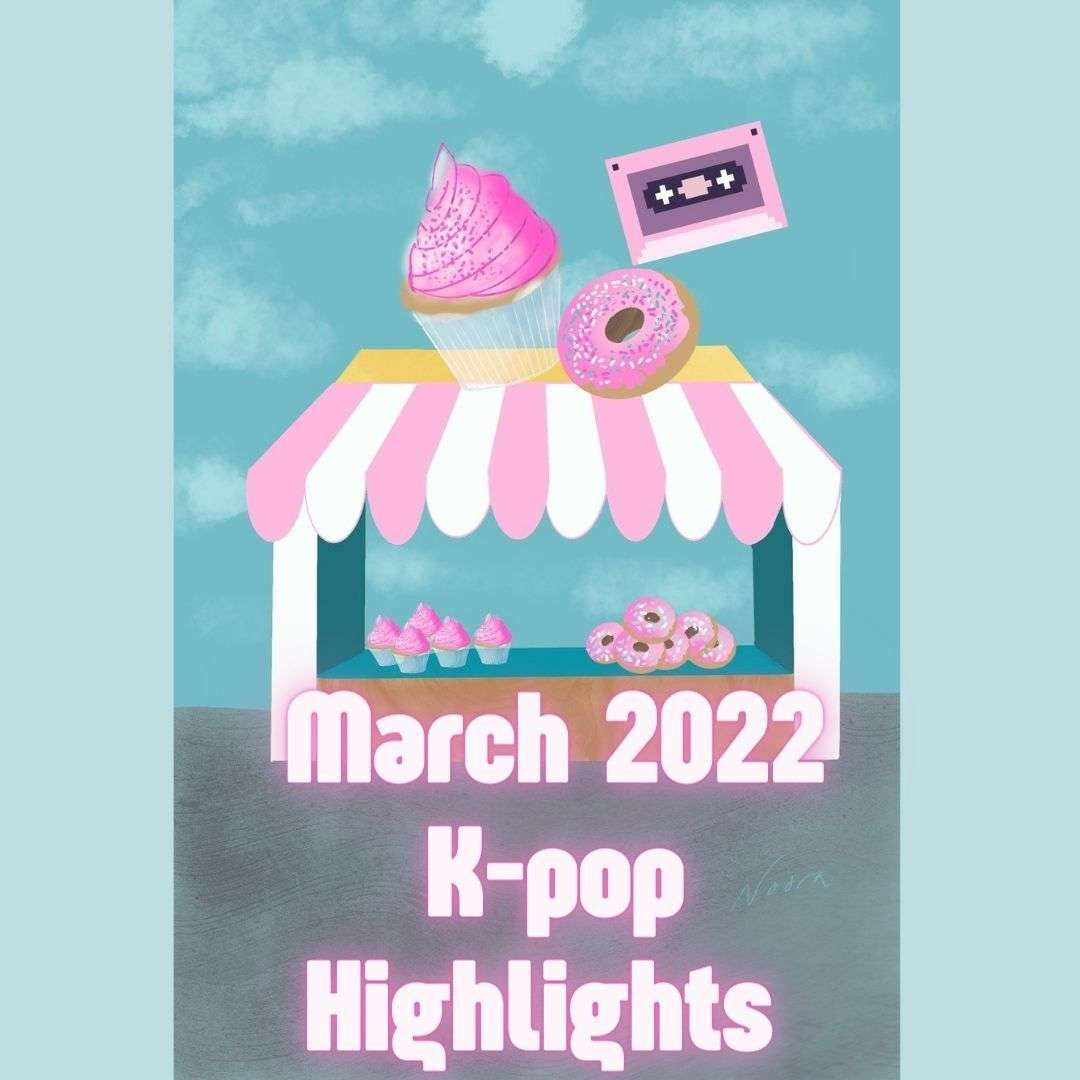 Hi everyone! How was March for you, and did you enjoy the K-pop songs released? Again, I hope you are all safe and healthy. I send all my support to those who have been in a stressful and challenging time lately.

I felt that there were more music releases in March than in February, I am not sure about this, but it feels like that. Maybe spring is the time that the releases come more often as the summer is getting closer. I will continue this K-pop monthly highlight -series, as I enjoy going through the last month’s released songs. I also have a music production-related blog post coming this month for those of you who want a more technical approach.

A note that I use the K-pop term here often, but I think in these blogs, I’ll have all aspects of music and happenings here that I come across and experience. In my subjective opinion, all the highlights in this post are the songs and things I have enjoyed. I hope this is for your inspiration and you get ideas to check out new songs that have come out recently.

You can find the monthly song highlights in a Youtube playlist for 2022. Here’s a playlist on Spotify for K-pop music releases for 2022, which I have enjoyed so far this year.

Let’s move forward to the highlights of this month! 🙂

With attitude and rock aesthetics, (G)I-DLE “Tomboy” and the B-side “My Bag” (Album, Cube Entertainment)

(G)I-DLE debuted in 2018, and their new album release, “I Never Die”, is their first full-length album. “Tomboy” is a rock-pop track (I’m putting this way around!) with a super catchy guitar riff and melodies. The whole song is in a good balance. There are addictive hooks here and there, such as whistles and rock guitars and the very energetic performance from the (G)I-DLE, who nailed the rock style. You must do this style with attitude, and they certainly succeeded in it. The “Tomboy” music video is in rock colours, red and black, and with fun dance choreography. Rock is having its moment in pop.

I love hip hop, and the b-side “My Bag” on the new album sounds like a very classic style of hip hop, so this went into my playlist. Check out the cool and energetic dance choreography practice video. I really enjoy this new style and the songs of (G)I-DLE: I can’t wait to see them live in Frankfurt, Germany, in May! (G)I-DLE is performing alongside Monsta X, Enhypen, Oneus, Mamamoo, KAI (EXO), IVE, NCT Dream, AB6ix and Dreamcatcher in a K-pop mega concert in Frankfurt on the 14th and 15th May 2022.

WEi released their new mini-album called “Love Pt.1: First Love” this month, and the single release from the EP is “Too Bad”, a happy and dreamy love song with bubble gum pop sounds. The song has a very catchy chorus and a pop production that relies on the song’s melodies and the contrast of different song parts creating tension. It’s a refreshing spring/summer song that makes you dance and sing along. WEi’s new EP was the best selling mini-album on its first week of release for them up to this day, and it is their fourth EP. “Too Bad” dance choreography looks fun and cute.

Stray Kids released their comeback album in March, “ODDINARY”, and the song “MANIAC” is the first single release for this album. The song has some really cool sound hooks, for example, the loop/sound at the intro, later repeated throughout the track. I enjoy the chorus part the most, with the thick low synth sounds and singing. I think this song sounds the best at the club, but I also noticed that it gets better after listening to it more. The song’s dance choreography goes well with the song’s theme. Stray Kids has also announced their “Maniac” second world tour: the tour is in South Korea, Japan and USA. Also, a special mention here for another track on the new album: the song called “Venom” has a really cool sound design. There’s this spidery web -kind of plucking sound, which sounds really intense, yet it is so interesting.

The Brave Girls’ release “Thank You” shows upbeat and funky disco sounds, for example funky bass and disco strings. The single release is from their new mini-album, also called “Thank You”. I think Brave Girls currently has a pretty distinctive sound that they have had in their songs this and last year. The vocals and adding to that, the disco/tropical house elements and the optimistic-sounding vibe in their music make it recognisable. The sound and melodies they have are very 80’s style but brought to this day, which has been a trend in pop in recent years. Think about, for example, the hits of Dua Lipa and The Weeknd. The music video for “Thank You” has some futuristic vibes.

It is interesting to see how the Brave Girls will succeed on the Mnet’s Queendom’s season 2, which is currently running. It is fun to see different kinds of performances from the participants. Brave Girls, Hyolyn, Kep1er, LOONA, VIVIZ, and WJSN are the participants in the second season of the show. I don’t really watch tv, but this is a must-watch for K-pop fans 😊 Maybe I could do a post about the whole series, what my thoughts are, like a diary or something like that.

Another rock-influenced pop song this month is from Verivery, “O” is a beautifully melodic song, with some cool guitars in the song’s production. Here you have a powerful and emotional song. The song is about emptiness in your heart and trying to fill that void. I think this stands out from many K-pop songs with its particular sound, song’s message and being a little bit different with solid melodies. The vocals are great and create a touching story for the track. Verivery debuted in 2019, and “O” is their single release named “Series’ O’ [Round 0 : WHO].

We are getting back to the bubblegum pop, ready? I don’t know if it is spring or what, but I tend to find it refreshing to listen to some happy-sounding pop with great melodies. CIX released a new Japanese album called “Pinky Swear”, and the single release from the album is by the same name. “Pinky Swear” is a pop song with synths, funky guitars and string sounds, with happy vibes. The chorus is super catchy in this song. The music video is cute and pastel-coloured: CIX is dancing in a colourful doughnut bakery, and there are neon lights and flying doughnuts.

I chose Cravity’s “Adrenaline” for this month’s dance choreography, a powerful and energetic pop track. The song is from their new album called “LIBERTY: IN OUR COSMOS”, the second part of their album released in 2021, “The Awakening: Written in the Stars”. “Adrenaline” is a groovy track, and the dance choreography has some sharp moves. I especially loved the chorus dance part. Cravity has debuted as a group in 2020 and they already have five releases.

BTS Permission to Dance On Stage in Seoul (Online Concert)

BTS held concerts in March in Seoul, “Permission to Dance on Stage-Seoul”, and you could also watch online shows for two concert dates. I bought the 10th March online ticket because of my schedule, which was very convenient. The whole ticket buying experience and streaming experience are effortless and well thought out – I must give credit for that! It was also a great new idea to show the concert in movie theatres on the 12th day, and people seemed to have enjoyed that experience what I’ve heard.

The concert included big hits by BTS, and all the concert stages were carefully thought out. I really enjoyed the show, and it is fun that it is possible to stream big concerts these days. This means a lot of effort to enable such an experience from the artist and company for the fans. It is hard for me to say which part of the concert was my personal highlight because I liked the whole show. Certainly, it was a great show overall! I wrote the tracklist down during the online concert: hopefully, I didn’t miss any songs!

To sum up, in March, we had a lot of exciting comebacks in K-pop, and it seems like that for April too! What comebacks are you most excited about in April? In March, we got pop-rock, bubblegum pop, and some exciting new sounds. If you would like to follow what is going on in my daily life, K-pop related things, and my music projects, please tune in to my Instagram account if you’d wish to do so – thank you so much.

I hope you have a fantastic day and enjoy great music, concerts and life! 🙂 Stay healthy and safe, everyone.