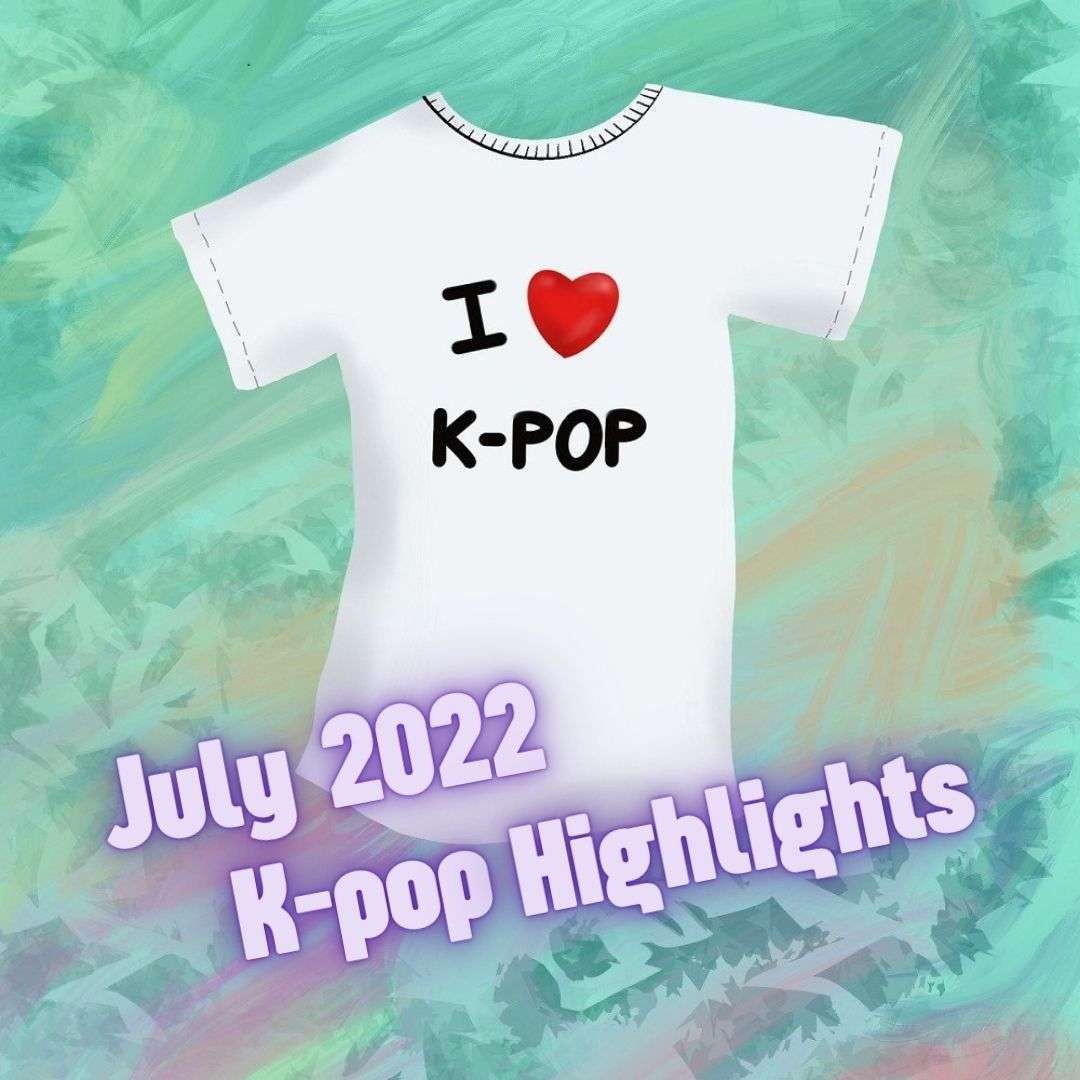 It’s time for some July K-pop highlights, and I hope you are doing good. Every month I gather my favourites that I have listened to and enjoyed in K-pop, so these are subjective opinions. Sometimes I discover some great songs after months. Last month, I listened to as many songs as possible. And there are a lot of songs every month to discover in K-pop! There are so many releases all the time, so there are a lot of songs to choose from.

In the last month’s highlights, I mentioned K-pop concerts coming to my home town: Sunmi is on August 28th in Helsinki. Many attempted to get tickets, but they were sold out in minutes. I tried to get tickets but didn’t get them. That was a big surprise that they sold out so fast! But the venue is relatively small. There aren’t many options for concert arenas at the moment in Helsinki. They are either too small or big concert halls for an artist like Sunmi. I’m happy for all of you who grabbed the tickets for the concert! 😊

Suppose you’re interested in some K-pop live concert reviews. In that case, I have a series about HallyuPopfest 2022 in London blog posts coming in four parts. Part I is already out, including Saturday’s Red Carpet event, The Showcase and the main concert of Sam Kim, P1Harmony and ONEUS.

HallyuPopfest was a great experience, and everything went great at the festival. It was a lot of fun. The HallyuPopfest has its next stop in Sydney from 13th to 14th August, so if you can go there, check the festival out. They also have some online concert options. It is in the coming weekend when this post is published!

Let’s hop on to the monthly highlights! 😊

SHAUN is most known for his massive hit in 2018, “Way Back Home“, and he has just released a single “Omnibus Pt. 1: Kaleidoscope”. The title track for his new EP release is “Road”. The single has three songs: “Road”, “Answer,” and “Don’t Let Me Know”. SHAUN, a singer-songwriter, is also a DJ and producer. He has been the keyboard player and a backup singer in a rock band called “The Koxx” since 2009.

“Road” is an exciting mix of a relaxing pop track, which builds up tension and turns into an EDM anthem in the chorus. The verse’s melody, with SHAUN’s soft voice, continues in the chorus as the guitar melody. The simple melody builds an excellent continuity throughout the song. The variation of intensity in the song correlates with the song’s meaning. SHAUN describes this song as going forward and healing yourself from feelings that aren’t good for you. “Road” has a dreamlike and colourful music video. This video includes bright lights, just for your information.

The five-member boy group, MCND, released their new EP “THE EARTH: SECRET MISSION Chapter.2” with six new songs in July. “W.A.T.1” was pre-released as a “Track Video” in June. Still, the official EP release was in July, so I included the track in the July highlights.

“W.A.T.1” is a light and melodic pop track and the title track from the EP. It is so lovely to listen to: I feel this is a great laid-back summer song. I enjoy the light flute synth sounds/loops creating a cosy atmosphere in the music. The vocals are superb too in” W.A.T.1″.

MCND also released the song “#MOOD” from the new EP, an energetic K-pop song. MCND caught my attention last year with their song “Crush“. I loved the song: it has a super catchy chorus, and it was just playing in my head for weeks, in a good way. “Crush” also has a really fun dance choreography. MCND is touring America this August if you want to check them out performing live.

J-Hope’s (from BTS), the first official solo album, was released in July, and it’s different from what I had expected! The album “Jack In The Box” has fascinating musical influences. It is more artistic in genres than the previous solo songs from J-Hope, for example, “Chicken Noodle Soup” and “Daydream”. So this is a step away from pop.

The musical influences I hear on the album are mostly hip hop and pop music from the 90s. This is just my opinion, and I don’t know if it’s correct, but it sure sounds like that! I hear hip-hop classics influencing this release a lot. I hear similarities with LL Cool J (the track “STOP”, somehow his music comes to mind!), French hip hop (the jazzy vibes in the album), American hip hop (“Arson” – the beats) and R&B (= (Equal Sign) – melodic and emotional). All these influences exist in today’s pop music. Still, here the production choices make it sound similar to that era of music, using, for example, sampling in a way familiar to the 90s.

I picked “Arson” as this month’s highlight, which is the second single release from the album. I feel that the vibe and the sounds of “Arson” are very 90s. This song has a hip-hop beat, which reminds me of NWA and other classic hip-hop groups. The song is mighty and groovy, with a lot of hooks. The song has a dark vibe but is also confident in its lyrics. The music video is also very artistic and fits the song’s vibe.

J-hope visited IU’s show “IU’s Palette”, and they together performed a great version of the song “= (Equal Sign)” from the album. Also, J-Hope performed at the music festival Lollapalooza 31th July, headlining the festival as the first Korean artist ever.

Next up, we have a melodic pop track from the six-member girl group STAYC, and they are back with a single called “WE NEED LOVE”. This single release includes three new songs and a remix of the “RUN2U”. STAYC debuted in late 2020, and this is their third single release.

The single’s title track, “Beautiful Monster”, starts with an exciting synth sound, and after that, the song builds up through the melodic verse to the chorus. It’s nice to hear these melodic pop songs occasionally because many K-pop releases tend to be these days less melodic. The song has a nice combination in the lyrics of the opposites in love. The person is conflicted about whether the love is good or bad for her.

The music video is colourful and with cute cheerful dance choreography. The group are in the forest and home, in the city and at the drive-in movies. There isn’t one theme in this video. The song is excellent, and STAYC won “The Show” music show with “Beautiful Monster” on July 26th.

The collaboration of the month, Loco & Hwasa, “Somebody” (Single, Dreamus)

The last highlight for this month for me is “Somebody“, a collaboration between Loco and Hwasa from MAMAMOO. They have collaborated before with the pop song “Don’t” in 2018, which was performed on a television show called “Hyena on the Keyboard”.

“Somebody” has a light and dreamy atmosphere and is very melodic. The song starts with a flute sound/loop intro, and pop guitars come in as Hwasa starts to sing with her soft voice. Loco raps and sings in the second verse, and they both sing the second chorus. The song builds up amazingly. It is a great song, and I think this is amazing when driving! If you try to concentrate on something, I feel this song is great for that.

This single release also includes the song “Lemon“, an urban-sounding housey pop track. I like this track, too: it has a darker night mood than the single’s title track.

There are my highlights this month: I have more of this July’s favourites on my Spotify playlist if you want to check that out. What new favourite songs did you discover in July? There were still a lot of summer vibes this month, but maybe calmer tunes than in June’s highlights. I also have a Youtube channel with a playlist of all the highlights in 2022.

In the coming weeks, exciting new releases are coming soon. I’m most excited about the new mini album, “Strange World”, from Ha Sung Woon, which will be released on August 24th. It’s great to hear what kind of songs are on the new album, so I’m waiting for this one! I’m also looking forward to the Blackpink comeback, which will be on September 16th! They will release an album called “Born Pink”. Blackpink is going on a world tour in America, Europe and Asia since October, so it’s an excellent chance to go to their live concert.

I hope you are all safe and healthy and wish you a happy week. Be inspired and enjoy life! 😊

K-pop favourites from 2022: the best of the best