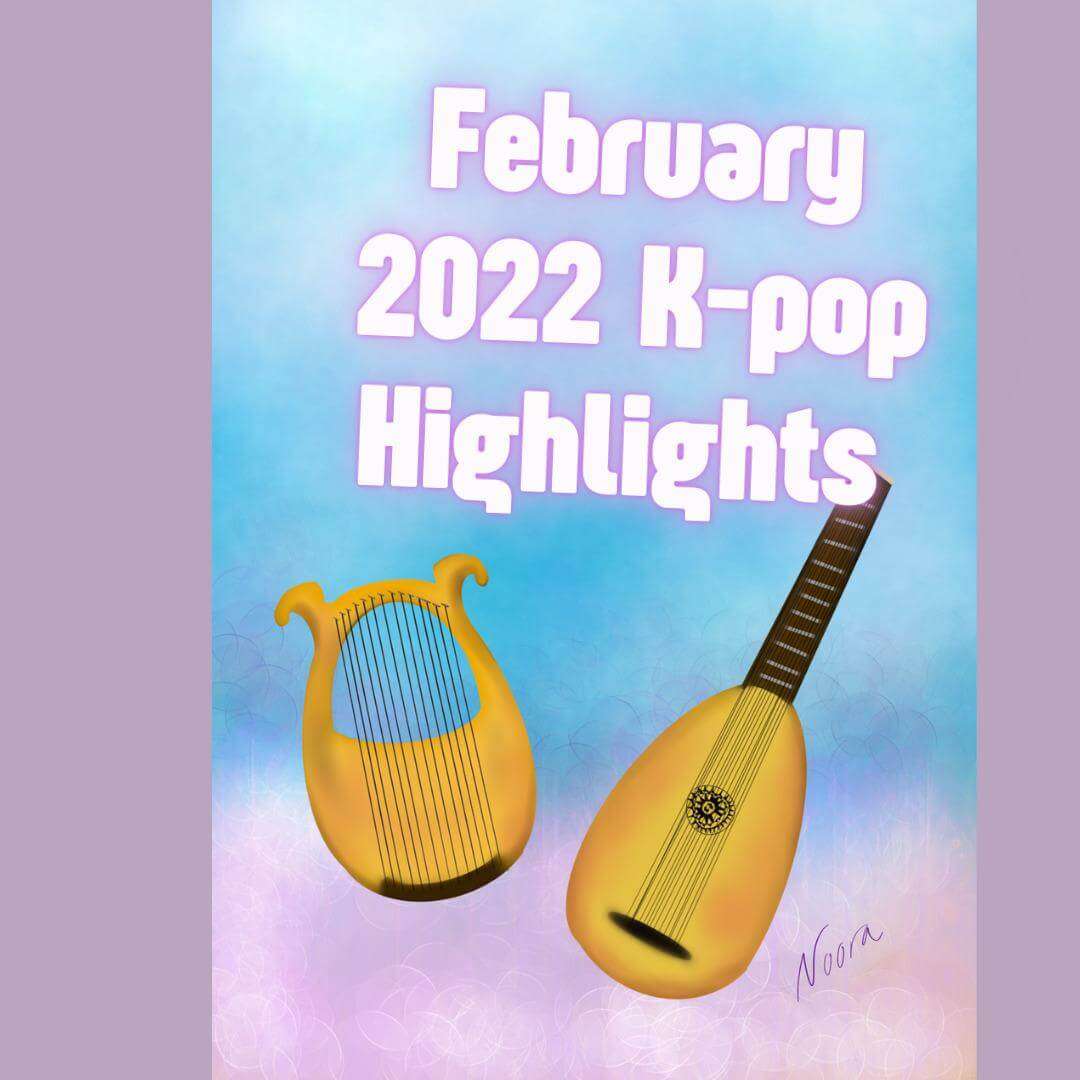 Hi there! Welcome to the second blog post of K-pop highlights 2022 for February. I hope every one of you is safe and healthy. K-pop has been bringing joy to February and also start of the March, which has been at least heavy and difficult times. Personal things, fortunately, lift the mood a little bit: I finally got to attend K-pop dance class in person (not online) for the first time this year, now in March, which was a lot of fun. Adding to that, I’m trying to go through the Red Velvet “Queendom” choreography; it is a fun choreography, but some parts are tricky. That brings to mind season 2 of Mnet’s show named “Queendom” that starts 31st March, and this will be interesting to watch for all the K-pop fans. I’ll be watching the show if it’s possible from my country.

News has been coming concerning K-pop and new technology, web3 and blockchain. Forbes’ article explains what these terms mean if you’re unfamiliar with them. Please check out my previous blog post, “5 Predictions for 2022 K-pop and music industry“, where I discussed this topic briefly. One big announcement was the strategic partnership between SM Entertainment and Binance. If I understood this right, the fans could recreate content in a metaverse. So rather than a P2E, which stands for play-to-earn, this metaverse will be, as they call it P2C, play-to-create, ecosystem. Binance, one of the world’s leading centralized crypto exchange platforms, provides the technology also for NFT and the blockchain ecosystem.

So here are my picks for the February highlights, and it is my very personal collection of songs from the month. I’ve created a Spotify playlist for all 2022 favourites, including highlights and other tracks if you’re interested to check that out. I will be adding songs there during the year that I enjoy. I am still using Tidal as my music streaming service and a happy customer of that music streaming platform. The sound quality is much better than in Spotify. All the 2022 highlights are also collected on a playlist on my Youtube channel. Not much content there yet, sorry guys, but I’m working on that slowly.

Let’s hop on to the February K-pop highlights!

This was my most awaited release for this month. I’ve been listening to Ha Sung Woon’s songs every day since I discovered his music – just great songs, and the vocals are perfect. “You” is a special release for the fans, called Ha:neul, which can be translated as “the sky”. The album contains previously released songs from film and tv series soundtracks such as “Her Private Life” and “True Beauty” and one new track.

“You” includes a new song, “Can’t Live Without You”, a cosy and warm R&B track with amazing soft vocals and warm-toned guitar melodies accompanying the vocal melody. The song is a perfect song for February, a Valentine’s Day month, as the lyrics describe to the loved one how important that person is in their life. The cosy and warm vibes are also in the music video that has been filmed from the point of view that you are there with Ha Sung Woon – a very cool idea.

Every song on the album contains the word “you”, a funny little detail. “It’s You” is one of my favourite songs: the song has nineties retro vibes, drums, and sounds, and you can hear Ha Sung Woon’s great powerful vocals here in the song’s chorus and middle eight sections. Other great songs on this special EP release are beautiful ballads, “Think of You” (such a beautiful song!), “Fall in You”, and “Thank You”. If you love ballads, you will love this song: do check out the song “Who Are You” from the tv drama called “Moonshine” OST that was released at the start of 2022.

Here you have a relaxed and easy-going song and single release, “Ghost Town” by Moonbin and Sanha from Astro. Laid-back hip-hop beats and an acoustic guitar gives the track a soft vibe, and 808 bass is booming as a contrast in the music production. It is an enjoyable track to listen to, and Moonbin’s and Sanha’s vocals suit this style very well. I’m getting R & B vibes here, which is good, in my opinion. According to Soompi’s article, they’ll release a mini-album in March – an exciting release to check out this month.

In February, BTS released a webtoon called “7Fates: CHAKHO” and a long-waited single “Stay Alive“. “Stay Alive” is performed by Jungkook and produced by Suga and EL CAPITXN. The song caters for a beautiful and grandiose ballad song that builds gradually to the end. In the promotional video for the webtoon, you see the members of BTS in different environments and clips of the webtoon. The promotional video is a shorter version of the song, so check out the more extended version on streaming platforms for the full version of the song.

VIVIZ made their debut in February, releasing the song “Bop Bop!” on a relatively new record label and entertainment company, “Big Planet Made”, which is also Ha Sung Woon’s new label. VIVIZ members are Eunba, SinB and Umji, former members of the group GFRIEND. So this fact made me really curious how this new song would be. I really like GFRIEND’s tracks, for example, “Mago”, a retro style pop song with great melodies. “Bop Bop!” has some Latin piano vibes at the start of the song, which starts the song really nicely. The song is very disco and retro style, with funky basslines and guitars and strings, which all make this song very groovy. The music video for “Bop Bop!” is very cheerful and colourful, and the theme seems to be space disco – that’s kind of fun, I think 😊

At first, when I heard “GingaMingaYo” by Billlie, it was not my cup of tea. Now, after listening more to this track, I think the song has interesting elements and it holds the listener’s interest through the way. The song has many transitions, an interesting bouncy bass sound, and a simple/straightforward beat. I don’t know how, but this sounds like a children’s song to me. But not in a bad way, too simple or childish. The group member, Tsuki’s, fan cam got a lot of attention from people because of the variety of her facial expression during the song’s live performance. Billlie is a new girl group, that debuted in November 2021 with a mini-album called “the Billage of perception: chapter one”.

Taeyeon’s “INVU” is a single release from her 3rd album of the same name. The song is a calm, ethereal pop track. The best element, in my opinion, is Taeyeon’s beautiful vocals that carry and lift this song. The chorus has nice layered synth sounds, and in contrast, the melody is made simpler here. The music video for this song is set out in a fantasy-land that draws its inspiration from Graeco-Roman mythology. The song’s message is that the person envies how easily love comes to others when not having that same luck they envy. Tayeyon is a former member of the legendary girl group Girls’ Generation.

I chose two choreographies for this month. I picked Treasure’s “Jikjin” here because I liked the chorus and outro parts of the song’s choreography. The timing and purity of the movements are the keys to the effective and strong appearance of the choreography. “Jikjin” is a pop rock-influenced song until the chorus where the mood changes to trap beats. The song’s mood changes again in the song’s outro to a party song. This seems to be often the case when listening to new K-pop songs. The vibe and mood can change many times during the song. A very different vibe in dance choreography is in my other pick. The choreography of OnlyOneOf’s “Suit Dance”, has a sophisticated and elegant mood. “suit dance” is a soft synth-pop track and very mellow.

StayC released their second mini-album called “Young-luv.com”, and “RUN2U” is the single release from the mini-album. I think the rhythm of this song is very similar to Billlie’s “GingaMingaYo”. But this song has softer and cuter vibes with lighter synth sounds and drums. For me, the highlight in the song is the intro’s synth sound. Also, the chorus is engaging with the sound of a brass sound/loop that sounds like it is from the 1920s. I like a lot the pastel colours and the Valentine’s Day decor in this music video.

How did you like the K-pop releases from February, and did you find favourite songs for your playlists? February highlights included some R & B, moody vibes, and beautiful ballads. Ballads are also the theme of this month’s picture: a lute and a lyre.

Last week, I watched online the BTS concert in Seoul on 10th March, “Permission to Dance on Stage-Seoul”. What a great show it was! So that’ll be in the March highlights obviously. I also went to a ski resort for the first time ever last weekend in Finland, so that was interesting. You can watch a short reel of the trip on my Instagram containing concert clips, snow and sunshine.

I hope you’re having a great day 🙂 Stay healthy and safe everyone.

K-pop favourites from 2022: the best of the best