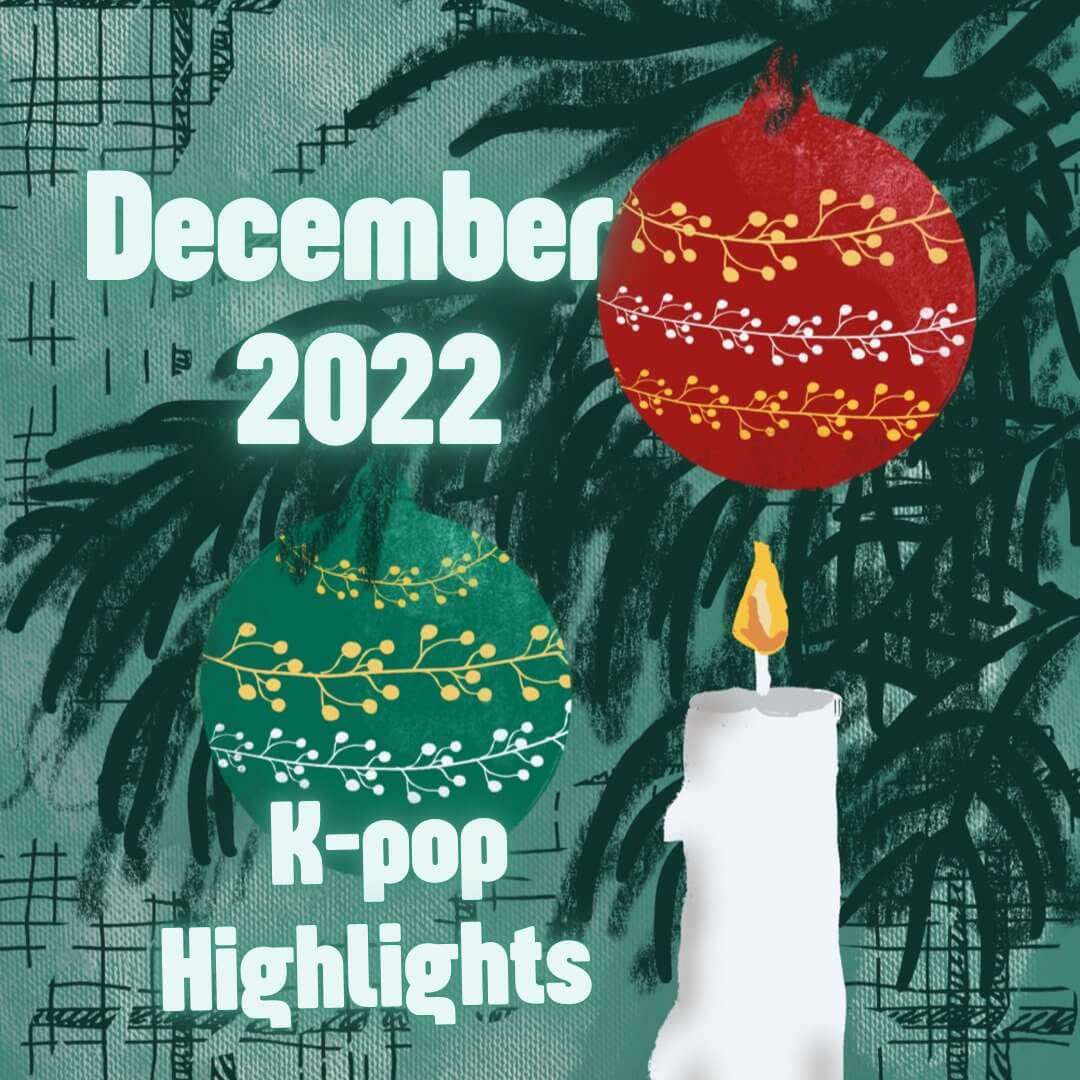 Happy and healthy New Year 2023 to everyone! Welcome to K-pop highlights for December 2022. How have you been? December was the month of Christmas K-pop songs, end-of-the-year K-pop award shows and also reflecting the year 2022 how it was. And we have already got exciting information about what is coming in January 2023: we will hear new songs at least from NewJeans, H1-Key, MONSTA X, TXT and NCT 127. So, I’m excited about what is coming next musically this month; it is a new year!

In December, we saw fewer K-pop releases but still many great releases. There were even debuts this month! Let’s hop into the K-pop highlights, which are my personal opinions. Which songs I returned to more than playing a few times and which made it into my playlists. I always try to think with my heart about which songs I enjoy the most.

Sometimes only some of the great songs end up on this list of monthly K-pop highlights if there are a lot of good songs in a month. So, I save all my favourites into my Spotify playlist, which you can listen to. I also have a Youtube playlist of all the 2022 K-pop highlights for you to check out.

RM from BTS came out with his album, called “Indigo”, at the start of December, with many great songs! But here I picked the title track, “Wild Flower“, as the album’s highlight. This song has a beautiful, movie-like theme and production, with a massive-sounding chorus. The singer featuring this song is Cho Youjeen. She has had a solo career, and she is in a rock band called Cherry Filter. Her singing voice fits well in this song in an emotional, powerful and delicate way.

In the interview with Zach Sang, RM explains how the song ideas and lyrics came to life. I find it fascinating to hear the meanings behind the tracks and the process of making the lyrics to, for example, “Wild Flower”. Also, what I love about the whole album are the different styles it has. You got laid-back hip-hop (“Yun”, “All Day”, “Closer”, and “Lonely”), funky pop (“Still Life” and “Hectic”), acoustic vibes (“Forg_tful”), experimental and jazzy (“Change pt.2” and “No.2“).

The album gets better and better whenever I’m listening to this. My favourite songs at the moment are “Wild Flower”, “Hectic (with Colde)” (groove of the bass and the guitar!) and “Lonely”, which has some great melodies. You should also check out the “RM Live in Seoul” on Youtube, which has all the songs and incredible live performances.

XEED, a new boy group, debuted with their “Dream land” EP at the start of December. Their debut song is “Dream land“, a melodic pop song. The chorus has some lovely melodies, and the track flows nicely with a K-pop-style production. XEED’s vocals are amazing, and they can also pull off an acoustic song like, “Just like now” in their debut EP.

All the songs in their “Dream land” EP are melodic and pleasant to listen to. XEED has four experienced members and a little older than usual K-pop debut groups. I wish to see more experienced group members and performers in new groups because they know better how the industry works and have more performance experience. Also interesting was that before the debut, there was crowdfunding for the XEED’s debut. So, XEED and their new EP were a positive surprise this month!

The five-piece girl group, NewJeans, came out with a pre-release single called “Ditto” this December. This song is a straightforward, stripped-down music production and relies on melodies and vocals. And that makes this love song simple but beautiful. The drumbeat, drum & bass -style, very light beat, and tempo are essential for this simple melody and chord structure. The contrast of the rhythm and simple melodies work here. Also, the music video is interesting: it has movie-like filming in a school and outside, but most of the things happen in a school.

NewJeans has been so successful in K-pop in the last year, 2022, as they broke sales records. For example, being the best-selling girl group debuted on the Hanteo charts with their EP “NewJeans”. And having massive hits like “Attention and “Hype Boy”. But NewJeans also had several controversies, for example, during their debut with the song “Cookie”. Therefore, I am still on the fence with this group, but I appreciate the excellent song releases.

ITZY, the five-piece girl group, made a comeback with their EP “Cheshire” and a title track in December. “Cheshire” is a mid-tempo pop song with a heavy beat in the chorus. This song has a lovely melody and feels like a solid K-pop song with harmonies and is a danceable song. The music video has different scenes as ITZY dances in various TV shows and backgrounds. Cheshire probably nods to Lewis Caroll’s Alice’s Adventures in Wonderland, where the Cheshire Cat becomes invisible. The last you see is the cat’s big grin.

In the Christmas spirit or not?: NCT Dream “Candy” (EP, SM Entertainment)

Last but not least, we have the cover song from the NCT Dream called “Candy” as a highlight for December. The song was released on a winter special mini album. The song and the video are in a Christmas style. So, it was nice to listen to this in December to get you into the Christmas mood 😊 The song was originally released by a boy group H.O.T. in 1996, so it is an old song! I think they did an excellent job with the production and vocals here, and the NCT Dream’s version is fun and groovy! The song is retro style mixing 90s style with modern music production. The music video is also very colourful and cute.

The first thing I noticed in this song was the retro happy sound and the lyrics. Because the lyrics here are interesting, you can interpret them in a few ways, which makes this song fascinating. Listen to the lyrics so I’m not spoiling the fun for you. If “Candy” got me into a Christmas mood, the EP also has some other great songs. “Graduation” (special video) is a beautiful slower pop song in traditional boy group K-pop production. Also, we got upbeat pop songs like “Tangerine Love (Favorite)”, “Take My Breath”, “Walk With You”, and the ballad “Moon” on the winter special EP.

Did you find great new K-pop in December? So, these were some of the December K-pop highlights for me. I am considering changes to my site and social media as the new year starts. And for now, I will continue this highlights blog series. But I am making more effort on the Instagram and Youtube accounts, so do follow me there if you are interested.

So my goal for the new year is that I want to make new posts in a quicker phase. Because I plan to start posting as new releases come, first impressions will come on weekdays to Instagram. So, if you are interested in that, please subscribe to my Instagram and Youtube to get the newest posts. Thank you for reading my blog, and I will continue to write concert reviews and highlights here in 2023.

I hope you have a fantastic start to the year 2023! Happy and healthy year to you! Be inspired ❤️