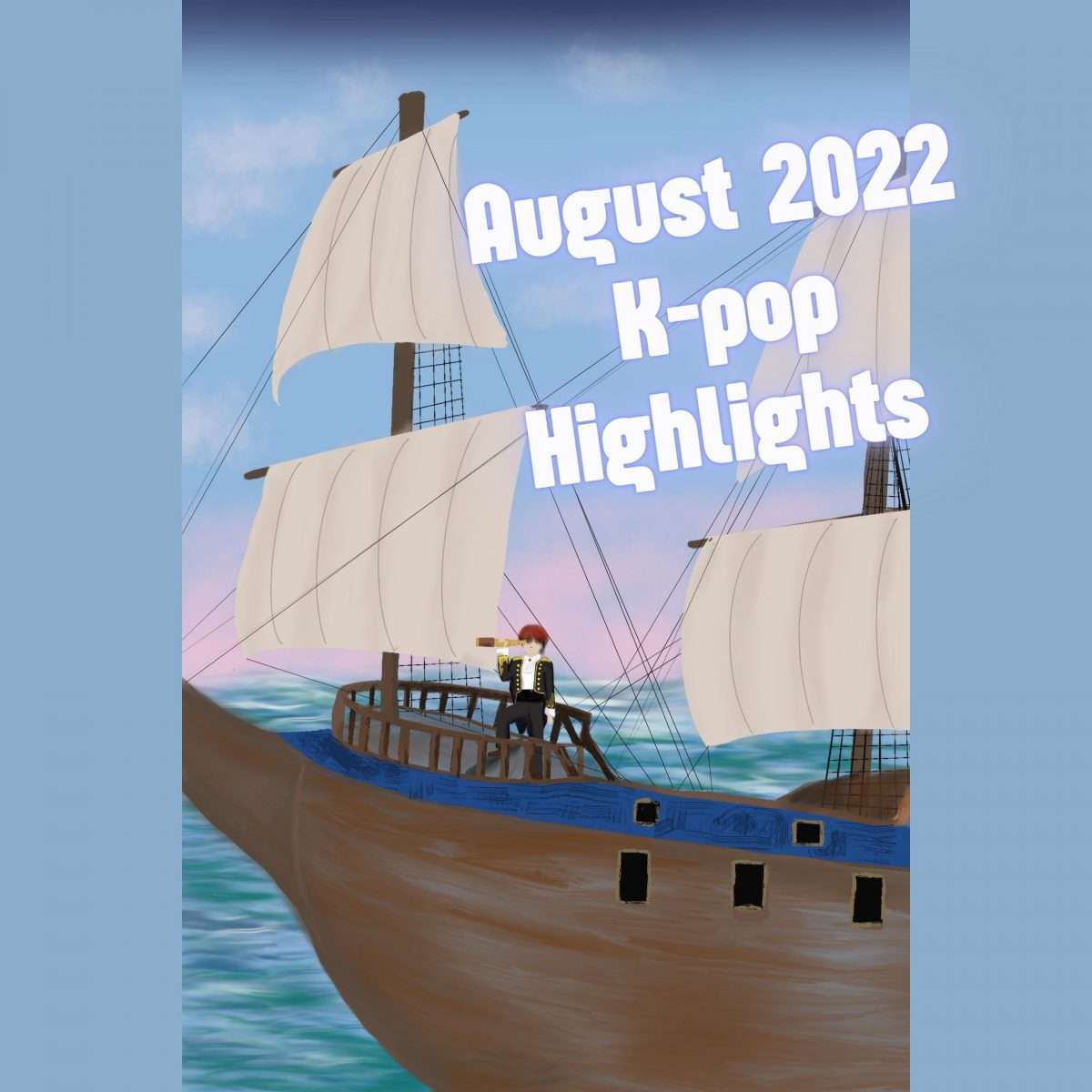 I hope you are all doing well: it’s time for some August K-pop highlights! This month it felt like time went fast: The weather is slowly changing here into cold autumn. So it’s time to snuggle at home when it gets cold again. I found a dance practice room at my workplace, where the new office moved, so I’m very pleased about it. Gonna be spending time there whenever I can 😊 I’m also setting up a mobile iOS music production environment for myself: what apps to use, headphones etc. So, I think I’ll make a blog post, maybe even a video (?), about what apps I like to use and have used. I thought that would be fun to do this autumn.

Sunmi had a concert in my hometown Helsinki, Finland, on August 28th, about a week ago. Did you go there? I didn’t get the tickets, as the concert was sold out really fast, but I heard the concert was amazing and people loved it! I got tickets to the KISU’s show, which is happening on September 15th in Helsinki, Valkoinen Sali. KISU has just released a new calming-sounding pop song called “Cheeseburger”. It’s nice that we have Korean artists coming to Finland. So grateful for it.

So, this list is my monthly highlights, my personal opinions, and what songs and releases I found interesting and enjoyed this month. Did you find some great songs in August? At the end of the month, many new releases were coming, and September seems to be packed with new releases too. This month I have dedicated half of the space to my favourite artist and a fantastic release, so it’s going to be a little different this month 😊

So let’s hop on to the August highlights! 😊

This comeback was something that I had been waiting for so much, and what a comeback it is! Solo artist Ha Sung Woon released his 7th mini album “Strange World” on August 24th under a new entertainment company he is in. Ha Sung Woon was before his solo career in the boy groups HOTSHOT and WANNA ONE, where the members were chosen in Mnet’s television show “Produce 101 Season 2”. He started as a solo artist in 2019, and he has an outstanding discography so far. Ha Sung Woon is also known for songs on OSTs: for example, in “Our Beloved Summer”, “True Beauty”, and “More than friends”. He also collaborated last May with BTS’s Jimin for the OST of “Our Blues”: the song “With you” is a beautiful ballad and a super hit.

The title track, “FOCUS“, is a super catchy, genius pop track that will play in your head instantly. “FOCUS” has excellent melodic hooks and tension building, as the song’s theme is an intensive obsession and interest in a dangerous crush. Ha Sung Woon’s vocals are perfect here, as always, and deliver the emotional side to the listener. He has an exceptional tone in his voice, which is always great to listen to.

With a guitar picking riff in the song’s verses, fits the music well, bringing a mysterious feeling. “FOCUS” has a fantastic hook in the chorus, which has been done with vocals and effects on it, as Ha Sung Woon at the same time sings: “I focus on you”. I love the booming kick, snare and bassline in the song, as it kicks in harder at the bridge before the chorus. This song makes you wanna dance!

The fantastic music video of “FOCUS” displays a darker and sexier image of Ha Sung Woon: from rock star looks to cowboy vibes and a red suit. These styles and feelings fit great for the song’s theme and mood. I’m a rocker at heart, so I just looooved it! The dance choreography for this song is superb and quite tricky. Besides being a fantastic singer, Ha Sung Woon is a great dancer, as his movements are swift and smooth. His dancing skills always amaze me. Ha Sung Woon also performed his comeback on Mnet’s M Countdown: excellent performance and the fan chants are great.

Next up on the EP is a mood change; as “Say Yes” starts, we move on to happy, positive and optimistic territory, from the dangerous and unknown. This song is an upbeat, cute love pop track, with percussions, piano and Hammond keyboard sounds, which give this track a fresh feeling to the song’s production. “Say Yes” has classic pop vibes as Ha Sung Woon sings softly and happily. This song is also very catchy and makes you smile.

The song “Baby Blue” (link to the GQ Korea live performance) again changes the gear on this EP, and we get very cool R&B melodies and a slower beat. In this song, Ha Sung Woon’s vocals shine outstandingly: I think this style fits his vocals well. This is also my favourite song alongside “FOCUS” from this EP because the melodies and lyrics are so beautiful. It is hard for me to pick my favourite songs from the mini album because all the tracks are so awesome. But if I had to pick 😊

The fourth song is “Too little too late“, a duet with JAMIE, who has released an excellent pop track “Pity Party” this year. This song starts with Latin rhythm piano and grows into a positive-sounding pop track, in contrast to the song’s lyrics about a love ending and a breakup. Ha Sung Woon’s and JAMIE’s vocals sound great here together. The song has a catchy chorus and some trap beats, so it is an exciting mix of different musical elements, still working superbly.

The last song on this EP is a beautiful pop ballad called “Daylight“, with acoustic guitars and piano. Ha Sung Woon’s optimistic vocals fix you on the love-filled hopeful lyrics. This is the perfect ending for this album, filled with great songs. In my opinion, all of Ha Sung Woon’s albums are always carefully constructed and cohesive. All the songs build a bigger picture. That’s what I love about his releases, that they are always amazing from start to the end. And “Strange World” is a fantastic collection of timeless songs! 😊

“Welcome to the Strange World” concerts on August 27th and 28th

Ha Sung Woon held two concerts, “Welcome to the Strange World”, in Seoul on 27th and 28th August, as he is enlisting in the military this autumn. Wishing Ha Sung Woon a safe and healthy military time. The two-day concert was held at the Sejong University Ocean Hall. Fans could also watch the shows through online streaming, which was amazing that this was made possible. I watched both days, of course.

The concert was over two hours long and breathtaking with super charming and talented Ha Sung Woon, great dancers and an excellent band playing live all the songs. We also saw two new dance choreographies for “Say Yes” and “Too little too late” from the new album. The Saturday and Sunday shows were slightly different in mood. I feel that Sunday was a more relaxed show with an extra playful atmosphere. Both days were incredible!

The setlist included the songs:

All of these are great songs! This live concert showed what a versatile artist Ha Sung Woon is and how much effort was put into all the details, making these concerts special events for the fans and everyone else. The concerts were a lot of fun, filled with emotion, for example, Ha Sung Woon’s letter to the fans, and great moments, as every song, is special. The show also included many outfit changes as the concepts had different vibes and Ha Sung Woon was conversing with the fans. Such a great event, I must say! 😊

Girl group, Billlie, came out with a new mini album at the end of August called “the Billage of perception: chapter two”, and the title track from this EP is “RING ma Bell (what a wonderful world)“. This song is a rock production that differs from what Billlie has released. The instrumental is rock, with guitar riffs and solos, and the vocal melodies go between rock and pop. I think that “RING ma BELL” is in a similar style to the (G) I-DLE’s “TOMBOY”, which is a powerful pop rock track and a hit song this year.

I think this is a great release, and the melodies in “RING ma BELL” are excellent: the chorus is super catchy. And I can see why this is the title track from the new EP. The other tracks on the EP are pop-style, so the single doesn’t represent style change. “RING ma BELL” is a different style to Billlie’s “GingaMingaYo” in February, which was that month’s highlight – I love that song. Billlie, a seven-member group, debuted in November 2021, and this is their 3rd mini album. I also started listening to Billlie’s track “Patbingsu“, released in July. I think this song is so fun to listen to. There’s a great-sounding chorus, I must admit. So Billlie is doing an excellent job with releases!

So, BLACKPINK, a four-piece girl group, is back with a comeback pre-release single, “Pink Venom“, as their EP/album has been scheduled to be released on September 16th. BLACKPINK released music last time as a group in 2020. So fans and music listeners have been waiting for this long. Last year Lisa released her solo single with two tracks, “LALISA” and “MONEY“, which were upbeat pop and hit songs. Blackpink performed at the MTV VMA’s with “Pink Venom” on August 28th and won awards at the event.

The “Pink Venom” starts with a traditional Korean instrument called Geomungo (거문고) and “Blackpink” chants. “Pink Venom” progresses into a pop-hip hop track with a lot of middle eastern pop sounds, for example, the strings. The first time I listened, I was confused with the chorus because I was used to the big beat drop they usually have in songs. But I think this chilled and confident-sounding chorus sounds great and differs from what they have done before. It still sounds like Blackpink and has their sound, so I feel this fits their image and style very well. The dance choreography is also fun to dance to. It is interesting to see what kind of songs the album will include this month.

Jaehyun, from NCT and subunits NCT U and NCT 127, has released a solo song called “Forever Only“. This is an optimistic-sounding pop /R&B track about longing for the loved one. The song has a superb melody in the chorus. The track loops the same chord progression: it works well for the song. We get a modulation (!) as the song is ending. I found this track very easy to listen to and pleasant with the beautiful melodies, and Jaehyun’s voice is calming. This single is part of SM Station project “NCT Lab”, where NCT members release solo tracks.

So that wraps up the August highlights, and this month the focus was on Ha Sung Woon’s “Strange World” release. There are a lot of exciting comebacks and releases coming in September, so it’s nice to wait for what’s coming in the coming weeks. I went a bit crazy with this month’s illustration, inspired by Ha Sung Woon “Welcome to the Strange World” concerts. I hope you find it fun and enjoyable!

You can check out more of my favourites from the Spotify playlist I have discovered so far in 2022. Also, all the 2022 highlights are on a Youtube playlist on my channel.

Stay inspired and positive! I hope you have an amazing day and week 😊