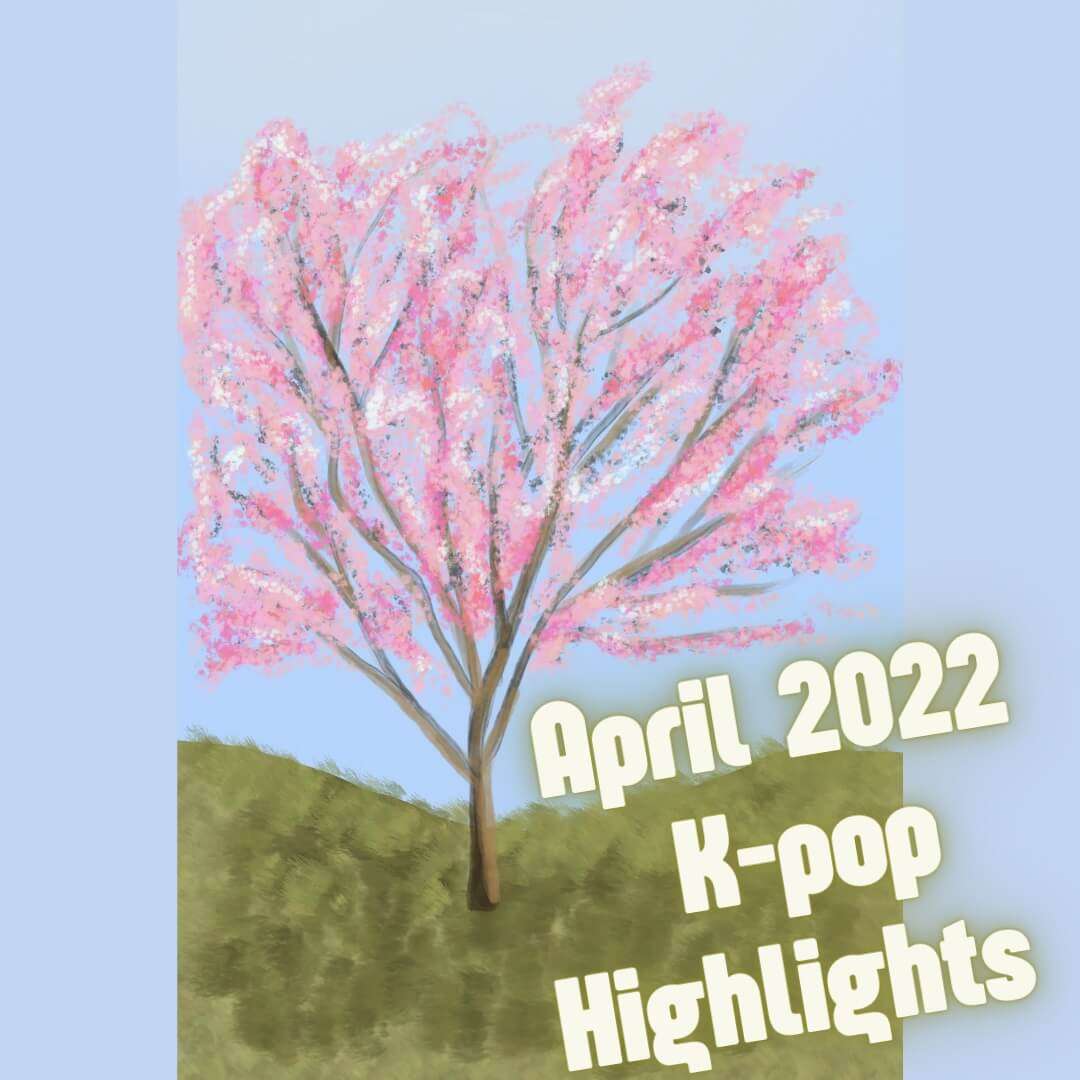 How was your April, and did you listen to a lot of new music? This month’s K-pop highlights: I feel that there were so many releases that it was challenging to keep up with what’s coming out. This is good: we listeners have more choice of new music. I tried to listen to as many as possible April releases. Some songs are instantly something you like, and some can take time to sink in. Also, it depends on what mood I am in and what songs I want to listen to.

I usually listen to the music production and try to evaluate is there something special in the song that makes me like it even more. Or I try to think about what is in the music that intrigues me, therefore making it a highlight. I’ll also try to evaluate why something doesn’t sound so good to me personally when listening to different songs. Usually, it can be a personal preference, so it’s good to be aware of it. So, this in mind, the highlights are this moment’s preference for me.

This month I think there were a lot of good songs, and I have a Spotify playlist where you can check out this year’s 2022 highlights in this blog and other tracks that I have loved. So in April, we got a lot of comebacks, and May seems to be like that too.

So, let’s hop on to the monthly highlights! 😊

Ha Sung Woon’s special release with Universe Music, “LA LA POP!” brings us sunshine and a happy mood to the spring and summer. This song has an optimistic vibe and is a bright pop song with very catchy melodies and a chorus to sing along to, and this is on my playlist all the time playing. The track has a fun mix of pop melodies and hip-hop beats, and there’s a strong piano track going on. I really enjoy the vibe of this song’s vocals combining rap and singing here, which is cool.

The music video was first released on the Universe app: the music video has a fun, colourful aesthetic and a great story. First, you see Ha Sung Woon as a weather controller in a control tower, second as a scientist in his lab and lastly as a field researcher looking for flowers in an unknown place. Such a versatile and superb performance from him, this song is yet again. And the cute little animated cloud on the video is super cute! The dance choreography has some cool moves. Universe Music held a Special Live Show for the fans on 16th April, celebrating the release of “LA LA POP!”. The show included performances of “It’s You”, “LA LA POP!”, and “BIRD”, having interviews with Ha Sung Woon and going through a song playlist for the spring.

I also have to mention, if you love musicals, you have to check out the musical called “Midnight Sun”, where Ha Sung Woon is playing Haram. It is his first musical performance, and the musical is running from 3rd May to 26th June 2022, and you can also watch the musical online through Metatheater’s site. The story is about a girl named Haena and a boy called Haram. The cast (Haena/ Haram) changes on different dates. There are cast also as Haram: ONEW (SHINee), Jinho (Pentagon), Song Geonhee and Y (Golden Child). As Haena the casting is Kim Namjoo (Apink), Lee Sang A and Kwon Eun Bi.

I watched the musical online on 4th May, and this story is really touching and emotional, with great songs. I really recommend it and Ha Sung Woon did an amazing job as Haram! The musical as a whole was wonderful, I loved the cast and it has memorable songs. I love musicals, so I had a hunch I would love this one too 😊

IVE is a reasonably new girl group, and “LOVE DIVE” is their second release after the successful “ELEVEN” debut single released in December 2021. IVE surprised me with the “LOVE DIVE”: the song is a traditional pop song that keeps the listener interested from the verse, bridge, chorus and throughout the whole song. It seems a really cohesive track, and still, it keeps nice variation with the different song parts.

I think the song sounds like a Eurovision song in the chorus in a very good way: it is grandiose, and I can see the wind machine on the stage already in my mind. Here is an example of Loreen’s Euphoria to show what I mean: the song won the 2012 Eurovision Song Contest. Eurovision cliché is that there is a wind machine going on at some point of the song/ the whole song. I just get that feeling when listening to this song, I can’t help it! The Eurovision song contest is actually held this week in Italy when this post is coming out, so if you’re interested, check that out.

I like the “Love Dive” dance choreography: it has big moves and cute gestures as a contrast, and it’s a lot of fun. The music video is in a love-themed mansion filled with hearts and cupids. IVE had good success with this single on the charts, and they have won various weekly music contests with this song.

ONEW is a member of the legendary group SHINee. He released in April a solo mini-album called “DICE”, where “DICE” is the album’s title track. I’ve been listening to “On the Way” B-side from the EP a lot. The song has a nice chill and groovy vibe, with soft vocals. The production has funky sounds, some flute (?) loop, funky bass, and a minimalistic amount of layered sounds. The song’s mood is set this way as chill and optimistic. But the drums are snappy here, and the kick drum is noticeable in the mix. This song reminds me of summer nights when there is just the right amount of wind, and it’s warm – I don’t know how else to explain it. I wish it was summer already! 😊

“X-Ray” is the first single released from Ghost9’s sixth mini-album called “Arcade: V”. Ghost9 debuted in September 2020. This song has excellent melodies and a good production: the chorus stands out and is coming at you with power. On the other hand, all the parts feel melodic, and the whole track is cohesive even when there are very different kinds of song parts and a lot of contrast there. There is a nice build from the bridge to the chorus, and I like the “guitarish” riff going through the chorus and high pitched vocals. Last year, I enjoyed listening to Ghost9’s EP “NOW: When we are in Love”, a dreamy and cheery pop such as “Intro: On And On“.

Reflecting on the past, BIGBANG “Still Life” (Single, YG Entertainment)

BIGBANG released their long-awaited single in April. They catered for a very emotional and, I think, sincere song. “Still Life” is BIGBANG’s first release since “Flower Road“, which was released in 2018, and many have been waiting for their comeback for a long time. “Still Life” is a rock ballad with melodic brit guitar rock echoes from past decades. The four seasons mentioned in the lyrics symbolise life, time passing and changes. In the music video, the BIGBANG members are shown in different settings. The members are in different places from each other – it seems like everyone is in their own world in the video. I like the song’s chilled vibe and melodies – it’s pleasant to listen to and has some lovely guitar melodies.

PSY, a K-pop legend definitely, released a new album called “9th”, and the first single released from the album is “That That”. BTS’s SUGA has been writing, arranging, and producing this song and is featuring in the song and the music video. PSY has been busy with his own record label, “P NATION”, while he had the plan to make an album for a while, but the pandemic changed the plans for a bit. “That That” has some catchy mariachi brass and Latin beats, making this track very danceable. The chorus is catchy, and the song’s melody is hard to get out of your head.

The music video is with a wild west theme and it has some funny parts. There are a lot of background dancers in the themed outfit which makes the dance scenes really nice. This song is fun and is probably a party stomper at concerts for PSY. The album has many interesting collaborations, and this one is a great one. You can feel the joy of making this track from the interview where PSY and SUGA describe how “That That” came to life.

Jessi is back with a song with some attitude and I think this song has really catchy hooks and melodies that stay stuck playing in your head for days. I looked at the song credits, and PSY is one of the composers in this song and Jessi has been making the lyrics. The song is a hip hop-trap-pop song with some tongue-in-cheek lyrics. It describes how people are in love with taking photos for social media and getting attention. The track was created at a fast pace according to Jessi.

However, I think the song captures the meaning and purpose it was set out to do. “ZOOM” is a rhythmic track, and I like the bridge going to the chorus, which is melodic. There’s an excellent contrast to the rest of the song, and this part stands out. In Jessi’s music video, a dance group, called LACHICA, known from the Mnet’s show “Street Woman Fighter”, is with Jessi dancing the choreography. How cool is that?

Emotional love ballad and a dream collab: Jimin and Ha Sung Woon “With You”

Last but not least, we have an amazing song and my favourite collaboration.  Ha Sung Woon and Jimin from BTS performed a track for the OST for the drama “Our Blues”. Ha Sung Woon has sung in various soundtracks before: check out, for example, my post from February. This was Jimin’s first soundtrack song. “With You” is a beautiful ballad love song with touching lyrics and their voices sound incredible together. Both can sing in the upper register bringing the listener an emotional and delicate experience. Alongside being a fabulous song, “With You” made a record being the fastest song to reach No.1 in at least 100 regions on iTunes around the world.

In April we had a lot of new releases, therefore probably I keep finding new favourite K-pop songs from April still as I’m writing this that I enjoy. April’s highlights had some party and romantic vibes definitely – and a lot of variation. For the spring vibes, I decided to draw for April a cherry blossom tree as the picture of the month above. This ongoing month, May, I’m off to the KPOP.FLEX concert. I’m really thrilled to go to live shows again in a long time! And actually, this is my first K-pop concert to this day. You can find updates on my other social media accounts, Instagram and Youtube, and certainly, I’ll post the whole experience to this blog afterwards. All the highlights for 2022 are also on my Youtube channel as a playlist.

I hope you have a fantastic day, stay healthy and happy everyone! 😊