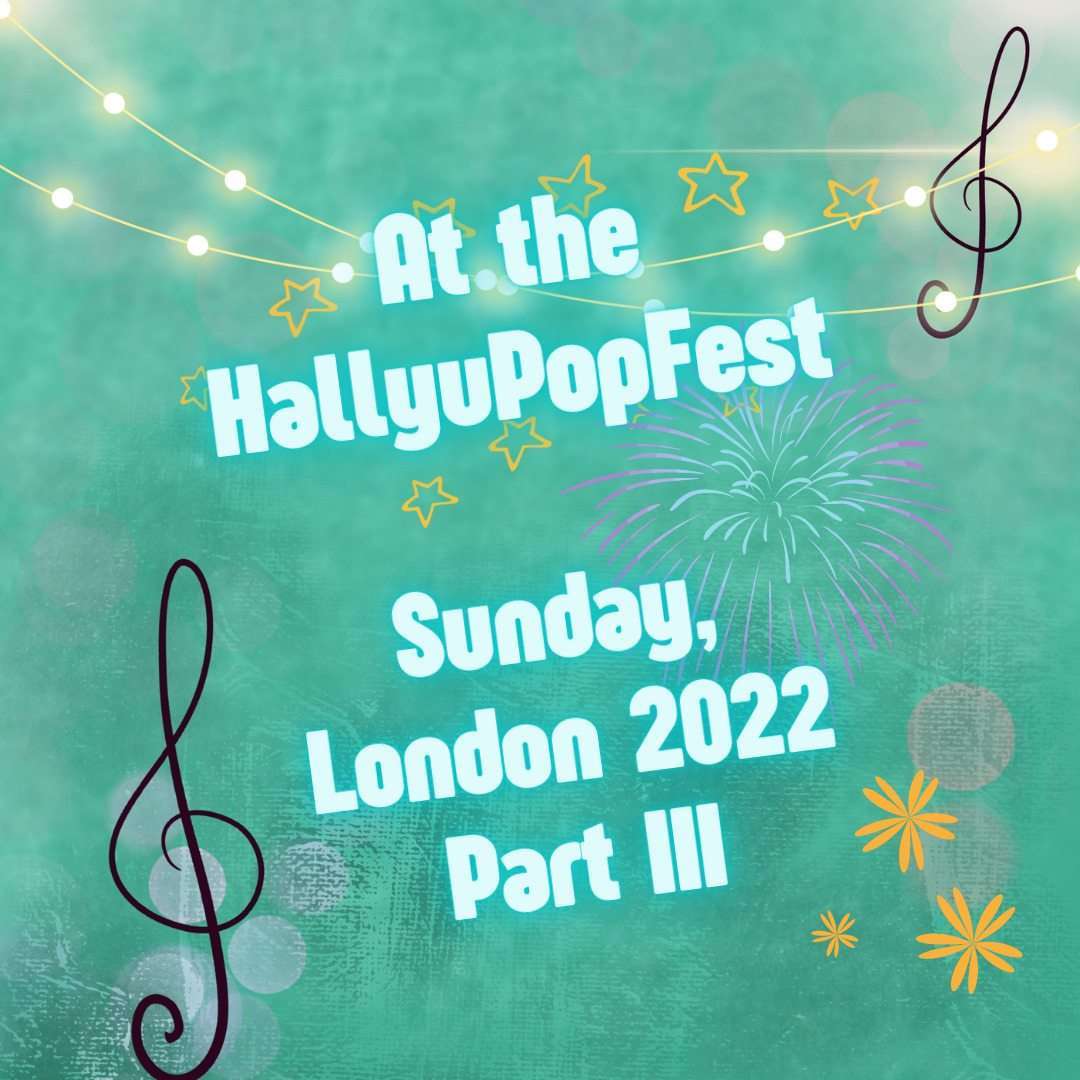 Finally, I’m back with the HallyuPopFest in London review, guys! This took more time than I thought because I’ve been working my day job and working on instrumental songs, learning music production etc. So, the time has been short. But I’m glad to return to happy memories from the summer when it was warm and sunny. I hope you all have happy memories from the summer 😊

You can check out parts I and II from my blog, which have been previously published. More festival memories you can check out on my Youtube channel: I uploaded my first Youtube video about K-POP.FLEX concert in Frankfurt, Germany. So, check that out if you’re interested! The video quality is, unfortunately, not superb because it is not 4K. You do – you learn.

So, here starts the HallyuPopFest London part III of the festival, which is 10th July, Sunday!

Second festival day at the HallyuPopFest in London, Sunday

We knew what to do and expect on Sunday, the second festival day. So we had some delicious hotel breakfast and headed to the VIP and ballot queue early. The queue went fast, and we had time to see what was in the HallyuTown. This small area was part of the festival and open to the public and near the OVO Arena Wembley, where the festival was held indoors. I have more information in the first blog post about the concert hall and our tickets for HallyuPopFest.

In HallyuTown you could find Korean products for example food, skincare, and makeup. Also, there were happenings, such as the artists from the festival visiting the HallyuTown. We got some skincare freebies, and I bought a ceramide cream, which I liked. It was time to buy some dinner beforehand because the concert ended at about 11:00 pm, and there were no restaurants in the area open then. And no shops are open. So, some dinner to the hotel room and off we go to the festival!

Sunday’s lineup for HallyuPopFest in London 2022 was:

First was the Red-Carpet event, where all the artists came to be interviewed and see the crowd (VIP tickets). The artists were interviewed by Nathan von Cho and Jiin Ryoo, translating and interviewing. Sunday was a warm and sunny day, as was Saturday, so it was good to have your hat or some kind of fan with you. With all the star power, it was dazzling already! All the artists got to pick a cute festival mascot and pose with it.

The HallyuPopFest Showcase on Sunday: Girl power and melodic moments

In the first blog post, part I, I had the main show and the showcase reviewed separately, as P1Harmony and Sam Kim had different songs in their showcase and main show. So, I was surprised that on Sunday, both Weeekly and Paul Kim had the same songs in their 15-minute sets on the main show. Maybe I missed something, that is a possibility because the break between the showcase and the main show was short and I was buying food and drinks. I think the break could have been a little longer, for example, 45 minutes, because it was such a long day and the organizer would get more money from the customers.

I don’t know why the songs were the same in the main show as in the showcase. It would have been interesting to hear more of the artists’ songs live in the main show. Maybe there were music industry people for who the showcase was. So, I decided to review the showcase show mainly for Weeekly and Paul Kim instead of both shows separately.

The Showcase and the main show: fresh and energetic Weeekly

The showcase show was a 30-minute show for each artist: Weekly started the Sunday show. They are a relatively new girl group because they debuted in 2020 with an EP called “We Are”. The first song on the showcase was from this mini album, “Tag Me (@Me)“, which is an upbeat, cute pop song. With the same style, Weekly continued into their next song, “Hello“, from the same mini album. Even though they are a new group, they have already released four mini albums and many singles.

Next up was their hit single, “After School“, from their third EP, “We play”, released last year. This song was a big hit. This was the the first song I heard Weeekly, and I loved this song immediately. It’s a cheerful, bright, melodic pop song, and I think the vocals here are fantastic.

Weeekly changed the mood as they went to their newer material from this year’s mini album, “Play Game: AWAKE”. Going to a more “girl crush” -style, with a darker and mature sound, they performed “Solar“. The next performed song was the title track from the same EP, “Ven para“, which is also this style. I like some elements of this song: the powerful chorus and the experimental instrumentals. For example, the beats are engaging in this song. I must admit that “After School” was such an amazing song for Weeekly and so cute, that I think that style fits them well.

Weekly was cute and energetic, and they had great vocals and dance choreographies. And so many good songs were heard in the showcase: they did an excellent job!

The Showcase and the main show: Paul Kim brings the beautiful melodies

As quite a new K-pop listener, Paul Kim, singer-songwriter, was a new artist for me. But he has released music since 2014 and has a vast discography. Paul Kim started his set with the song “Wanna Love You” (here’s a great live version of the song!), which is a soul and R&B style love song from 2017. The concert arena filled with warm and cosy vibes as the show started. The whole show had a positive and great atmosphere!

Next was “Coffee With Me“, continuing the soft and delicate atmosphere and building into a mid-tempo pop song. Paul Kim followed with a soft pop song, “있잖아” (Engl. “Hey”), which is from a soundtrack (연애플레이리스트2 OST).

Paul Kim sang his ballad, “One More Time“, from his EP called “Star”, which was released this year. Next, Pal Kim performed a piano and guitar ballad, “Every Day, Every Moment, ” released in 2018. The third ballad in the showcase was “Me After You“, also from 2018.

Paul Kim had so many songs during the showcase, and the last song we heard was a melodic track, with retro sounds nudging to eighties, called “Spell“. This was a more upbeat pop track from his mini album “Her”, released in 2016, and fitted to the end of his show.

Paul Kim showcased his excellent singing voice and varied amazing song selection over many years at the HallyuPopFest. The show left a positive and happy feeling!

Next up was Cravity, who are a 9-member boy group and they debuted in 2020. I had the Meet & Greet on Sunday for Cravity. “There are so many members!” was my first thought in the event and the friendly atmosphere of the meeting. I knew Cravity from their great pop tracks, such as “Adrenaline” this year and “VENI VIDI VICI“, from last year, so I was looking forward to their performance.

Cravity started their show with an intro song energetically and moved forward to this year’s album title track, “Adrenaline”. This is a powerful, melodic pop-EDM song, and it’s one of my favourites this year; it was on my March K-pop highlights listing. Subsequent, Cravity performed their melodious pop song from last year, “VENI VIDI VICI”, which has a slower tempo than the previous song.

Next, the mood changed a bit into a darker style with “Bad Habits“, which is from Cravity’s 2021 EP “HIDEOUT: BE OUR VOICE – SEASON 3.” The lighting also in the arena changed into a red mood, and the song is a trap/hip hop-influenced pop song. “Mammoth” was the next song, and I feel that this song was perfect for a live performance, as it has more power than the studio version. I liked this song live! This song was new to me, so I thought they sang “Vamos” (Spanish Engl. “Let’s go!”), because that would have fitted in the vibe and feel of the song, in my opinion. Especially this live performance, which was energetic and there were fire pyros on the stage.

Cravity performed “JUMPER“, a great track, with great energy from the members. This song is from Cravity’s first EP, “HIDEOUT: REMEMBER WHO WE ARE – SEASON1.”. This song is an upbeat party track with hip-hop beats. We also heard “My Turn“, which has a more experimental rhythm and chorus, which is fun to listen to. This was also the last song of Cravity’s show at HallyuPopFest.

Cravity’s set list included their hits and a lot of upbeat songs. The song selection performed at the HallyuPopFest in London are all songs with good hooks, choruses and vocals. Cravity’s performance was amazing. For example, they had fabulous choreographies, and it took a lot of work to perform this many upbeat songs in a short time frame, which was 30 minutes in the main show. Cravity lit up with their energy the arena and people were dancing!

Summing Up Sunday Part I

The Sunday performances described here started the show and were a great start for the second day at the festival. There was singer-songwriter music and performance, such as Paul Kim’s, and then young K-pop energy with Weeekly’s cute /girl crush styles and Cravity’s energetic performance. All these performances were superb! What is excellent about these festivals is that there are such varied artists and musical styles. It’s so entertaining to experience a vast array of music in a short time.

So, in the last part, IV, the artists will be CIX, Kep1er, SF9 and KAI. And my monthly highlights is also on its way soon, and here’s the August highlight post! Until next time, take care, and I hope you’re inspired whatever you’re doing: drawing, playing an instrument, singing, cooking, writing etc. Meanwhile, you can listen to the Spotify playlist I have gathered of all the songs played and written in these blogs of the HallyuPopFest 2022 London!

I hope you stay healthy and happy! 😊