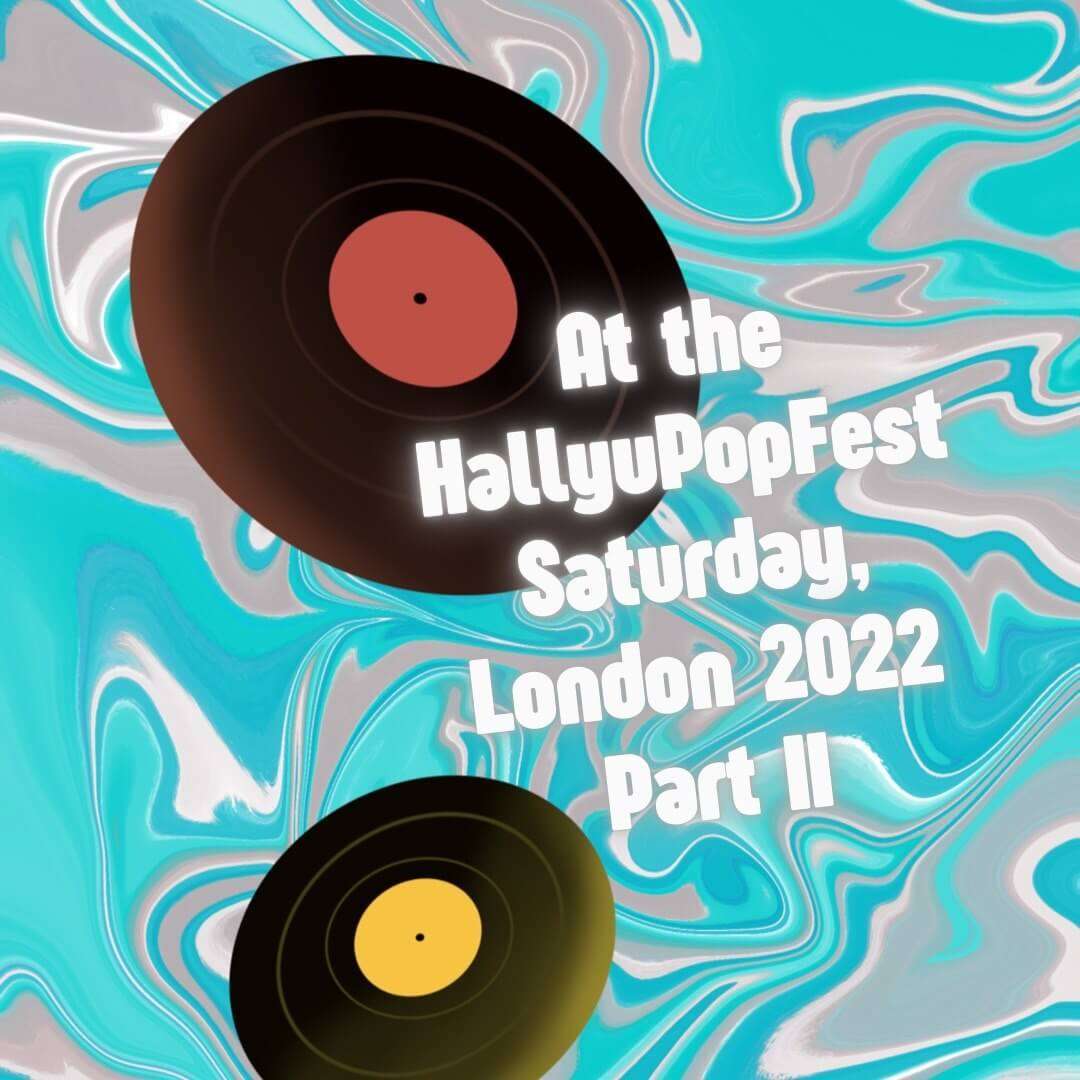 Hi everyone! How are you doing? Here’s the Part II festival report from the London HallyuPopFest 2022 Saturday. Part one post included the Red Carpet event, the Showcase and the Main event with Sam Kim, P1Harmony and ONEUS. Saturday’s main concert also had EVERGLOW, Hwasa, ASTRO and Chen performing, so we’ll be delving into these performances in this second part.

In Part 1, I go through more information about the festival and the festival experience on Saturday. The HallyuPopFest was held this August also in Sydney. So that must have been a lot of fun also! Did you go there?

So let’s go straight to the rest of the Saturday, 10th July, performances in London! 😊

After ONEUS performed EVERGLOW, a girl group with a lot of great songs, so I was really looking forward to them. Their single releases have been leaning on EDM (“Pirate“, “Adios“), hip hop (“DUN DUN“), and even taking inspiration from heavy metal synths (“First“) in the songs. In my opinion, these songs have excellent melodies and hooks, so they are hits. And their title track songs always have powerful energy. That’s why I expected a lot, and their show was great at the HallyuPopFest!

EVERGLOW started their set with “Adios” with a chorus that is an EDM banger, which created an exciting mood in the audience. Next was a more relaxed song, “Bon Bon Chocolat“, their debut single from 2019.

“LA DI DA” was the third song on the setlist, and this song has some great melodies. And the performance was so captivating: EVERGLOW was a group with hit song after hit song, such a fantastic group! I think I was singing the songs the whole show.

Their newest single release is “Pirate”, and this song fits Saturday’s mood. “Pirate” has excellent melodies and dance choreography. The last song on the setlist was “DUN DUN”, a powerful song mixing pop, hip hop and trap. This song was also a song that the crowd could sing along to easily. The vocals were superb throughout the show, and the show was energetic. And EVERGLOW gave all their energy to the performance. It was an outstanding performance!

Next was the boy band Astro, who divided their performances into units. JINJIN and ROCKY started the set with “Lock Down“, a midtempo track mixing trap, hip hop and pop genres. The duo and the dancers wore black clothes, but the atmosphere changed from the night mood to a party mood with the song “Just Breath“. This song has some 80s sounds and funky grooves of the 70s. I think this song is fun and has some humour in it. We need silly things in life occasionally 😊

Astro changed their duo unit, following Moonbin and Sanha from Astro. They started with “Bad Idea“, which has been playing on my playlist a lot this year and is actually one of my favourite songs! So I was delighted to hear this one. I love the funky groove of the guitar and bass, and the melodies of this song are fantastic. Next was “WHO“, which had the crowd going nuts with the swag vibes. This song was released this year, so it is a relatively new release.

The four members of Astro ended their set with “Candy Sugar Pop” together. This song is an uptempo synth-pop song with some retro sound influences. “Candy Sugar Pop” is from their newest album, “Drive to the Starry Road”, released this year. This song was fun and optimistic-feeling ending to the set. We got some popping flying paper to the end too!

I loved the dance choreographies, the variety of Astro’s performance, and the song selection. Astro has been active since 2016, and four members of the six-piece group were performing at the HallyuPopFest.

Hwasa is from a girl group MAMAMOO, but she has a lot of single releases, which we got to hear at the HallyuPopFest in London. Hwasa came to the stage in a bling-bling outfit and started the show with her song “TWIT“. The track rolled with booming bass and hip-hop beats.

Next was her song from 2022 and her newest single, “I’m a B“. This song has a beautiful melody and attitude in it. The song’s background is interesting as it tells an apology for the loved ones. After uptempo songs, it was time for a calmer song, “Bless U“, with hip hop beats and R&B vibes. This sounded beautiful with an uplifting melody.

It was a time in the set list for the 2020 released songs: starting with the grand sounding “Intro: Nobody else” and ending the show with the super hit “Maria“. The song is about self-love and finding a balance between being strong and pleasant but not mean or overly nice. I like this idea in the lyrics because it touches many people. The crowd was singing “Maria” in the concert hall together.

It was an excellent performance! Hwasa shined with her amazing vocals and charisma during the show. She also had a fantastic dance group, and I immensely enjoyed the dance choreographies during the show.

Chen was the last performer for Saturday’s main show, which was the time to prepare for ballad songs. Chen started the set with “Shall We?” which, in a live setting, grew into a beautiful and warm moment in the concert arena. After “Shall We?” he sang “My dear” from the same EP called “Dear my dear”, which was released in 2019. This was a delicate song with guitar melodies accompanying the singing melody. From the start of Chen’s show, it was evident that we would hear powerful singing with big emotions.

The third song in the set was “Beautiful goodbye“, and after that, “Love words“. These songs are from his first mini EP, also released in 2019, called “April and a flower”. Both of the songs were ballads and very calming.

For the last songs, we heard a bit more uptempo, but still, ballad songs, called “Best Luck” and “Everytime“, which is a collaboration with the singer Punch. I think these songs were the perfect ending to Saturday. Sitting there and listening to a great voice such as his was incredible.

And as the first festival day ended at the HallyuPopFest, all the performers came out again to greet the audience and say goodbye. What a show, and a day and a night! So many good memories were made on this day.

Saturday was full of great performances and excitement, I must say! We were exhausted after a long day. Because our day had started at about 10 am going to the queue, and the concert ended at about 11 pm. And the restaurants don’t seem to be open in the UK then. So be prepared to have some food and drinks in the hotel for example or some other option if you’re going to this kind of festival, which takes the whole day.

Surprisingly, the concert time was long, so it was great to see all these artists perform in one night. The acoustics were magnificent in this arena. Next time I might take a standing place, but I’m not sure… The seating place was also perfect 😊

I enjoyed a lot of this festival format where there was enough showtime for the artists: about five to six songs and talking between the songs with the audience. That would be too little for my favourite artists – I want an entire concert. 😊 But the good thing about this 30 minute-concept is that you see many kinds of performances, variations in songs, outfits, dance choreographies and moods through the show. And maybe you find new favourite songs and artists, even better!

I have a Spotify playlist of the songs played at the festival, so do check that out if you’re interested. So next in this festival series is the Sunday concert, day 2, in two parts!

I hope you have a fantastic week! Take care and be safe 😊