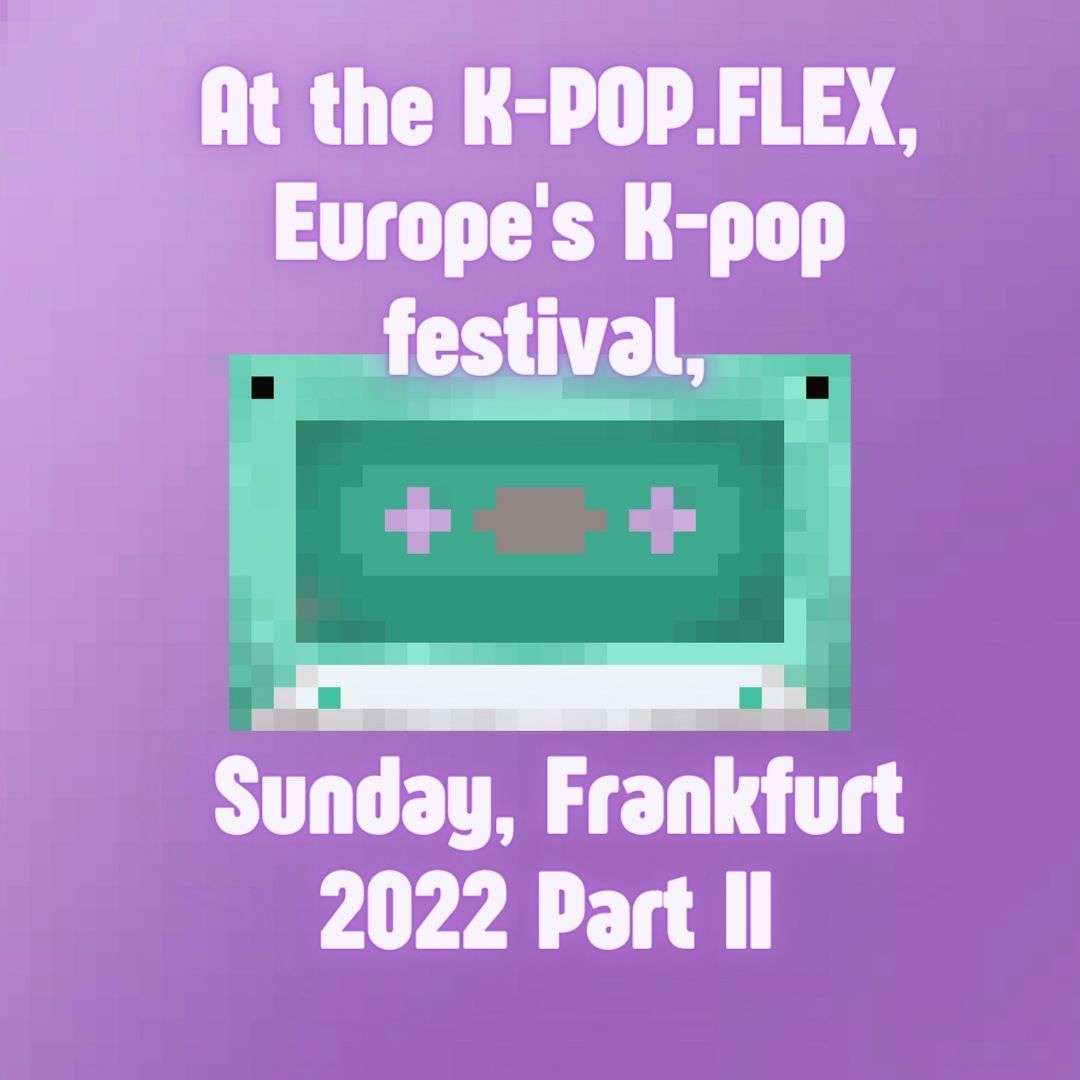 Here’s the second part of the travel blog post and a travel story about going to Frankfurt, Germany, to see K-POP.FLEX festival on Sunday, 15th May 2022. You can read the first part where I summed up the overall feeling of the concert, wrote about the performances of MAMAMOO, IVE and Dreamcatcher and had some holiday vibes in Frankfurt. In this second part, we will go through the rest of the performances and sum up the whole experience.

You can find the setlist I gathered of all the songs played in the Sunday concert on Spotify if you’re interested in checking that out. And if you’re interested in K-pop, remember to check out my monthly K-pop highlights. May’s post is coming soon, and I’m already writing that one. So many good songs came out in May that it is again challenging to choose the favourite tracks of the month!

I also made a vlog about the trip to Frankfurt, which you can check out on Youtube on my channel when I get the voiceover ready. It is a commentary type of vlog, and it includes other things besides music. It’s my first video, so please bear that in mind – I tried my best. Making this video was a lot of fun. I hope you enjoy the video when I get to release it.

So let’s continue where we left in Part I! 😊

AB6IX started their set with “Close“, an energetic pop track taking influences from the nineties dance music. This song was released in 2021. The first time I heard AB6IX’s music was last year: “Stay Young“, and it was actually one of my favourite songs in 2021, which is a melodic and fresh pop song. The group captured attention from the start of their K-POP.FLEX -performance and next up was “1, 2, 3“, a single release from 2022, an optimistic and happy pop song with a catchy chorus.

AB6IX debuted in 2019 as a five-piece group (now four members), and they just released EP in May called “A to B”. The single release track for this EP is “SAVIOUR“, with a darker vibe than the songs previously mentioned here. And this song seems to be a new kind of style for the group. But the new track wasn’t yet released when this festival took place.

Next up was a dance challenge where AB6IX taught a small number of various songs’ dance choreographies, for example, BTS’s “Permission to Dance“. The challenge was fun, and we were dancing in our seats!

The last song AB6IX performed was “Do You Remember“, from their second album released in 2021 called “Mo’ Complete”. The song is a soft upbeat pop track with some tropical house sounds. AB6IX’s set list on Sunday was cohesive and enjoyable: AB6IX’s performance stood out, and the feeling after their performance was great.

Next up was (G)I-DLE, a five-member girl group, and the way they started was fire! “Tomboy” started their set, and I was already dancing and singing. “Tomboy” was released this year in March, and it was part of my monthly highlights. I think this could maybe be one of the year’s best songs, in my opinion. The group had a break, did some solo releases and prepared for this spring’s release, and you can hear that “Tomboy” is a different mood and style from what they have released before. This shows how versatile the group is, and they can grow and adapt to new musical styles bringing still the best performance.

Next up was their debut single from 2018, “LATATA“, with a Moombahton beat suitable for the summer’s eve. This song was a good choice for calming the stadium and brought some relaxed vibes to Sunday’s set. I think the next song was something that many people loved because people were singing this loud: “Oh my god“. “Oh my god” is a single release from the EP called “I trust” released in 2020.

(G)I-DLE performed their B-side track from the new album “I Never Die” at the end of their set: “My Bag“. The song has a hip hop beat and sounds, with some nostalgic vibes from the nineties. I had this song in my March highlights because it’s excellent: a simple but effective hip hop baseline, groovy beat and a catchy chorus. (G)I-DLE definitely presented a varying set of songs and a great performance on Sunday. I would say that at the moment, they really are one of the top girl groups in K-pop, and this performance did verify that for me.

Monsta X performed only on Sunday on K-POP.FLEX, so many people had come to see them in the audience. The number of screams was loud when they started their set with the new song “LOVE” from their new EP called “SHAPE OF LOVE”. I listened to Monsta X’s new EP after the show, and I really enjoyed the cohesiveness of the EP. There are different emotions and feelings in the songs, which tell a story. And also a lot of great melodies, and it’s produced really well.

“LOVE” is a nostalgic sounding hip hop pop track (again, after (G)I-dle) with echoes from the nineties in the production. This song was a very energetic start for the show, and it continued like that. Next up was a song called “Rush Hour” from last year’s album “No Limit”, which is a very energetic track.

I think the highlight of this setlist for me was “Gambler“, which was next performed. This song sounded really excellent live: the start of the song with funky guitar and bass was booming in the stadium. I watched the video that I had recorded of the song’s intro afterwards and was like, “Wow!”. I wasn’t a big fan of this song when it came out in 2021 on the album “One of a Kind”. This is why I love to go to live concerts: you find new favourite songs and even bands sometimes because it hits a little bit different than listening at home, car etc.

The last song on the set was “사랑한다“, which is a fan tribute. This song fitted well to the end and was a fresh, light and happy song after the super energetic start. Monsta X did a great show on Sunday, I must say.

KAI from EXO was up next, and he started the set with “Peaches“. The song is from his EP released at the end of last year. This set brought a really different mood to the stadium and calmed down the vibes. The dance choreographies were fabulous all along with this set, and you could see the stage charisma of KAI even from far from where we were sitting. Which was quite far 🙂

Next up was “Vanilla” from the same EP, a slow pop song that continued the mellow mood. The next song was new for me because I haven’t listened to many EXO’s and KAI’s songs. This became my favourite of the set on Sunday, “To Be Honest“. This has a hip hop beat, guitar riff and a beautiful vocal melody. With the dreamy vibes and the great vocals from KAI, I think this song was a great live song and fit the atmosphere perfectly at that moment, at least for me. I was exhausted from the day and hungry… And thirsty too. This song went to my playlist after the festival. I like it so much.

The festival and the set ended with KAI’s super hit from 2020, “Mmmh“, which is a slow and sensual song. This song is from his first EP, “KAI”. The pyro flames and papers flew in the air during this last song, saying goodbye and good night to everyone who had come to the show. And so, the festival ended, and Sunday’s show was over. KAI’s performance was calming and sharp, and joy came through his performance, bringing a happy feeling to the audience.

The Festival and Trip Experience

So after the trip and the concert, I’ve been looking at photos and videos from the festival, and the overall feeling is gratefulness. The performers were incredible! To have experienced such great performances in one show is lovely. I found new favourite songs, and I’ll definitely go again to a K-pop festival in the future. In part I of this travel report, I already stated that it should have been told to the ticket buyers how long the show will, in reality, be at the K-POP.FLEX. Or one option is not to promise anything.

When you organize significant events like this, you have tens of thousands of people attending the festival site. You need a lot of staff and preparations and security measures so that the people are safe and feel safe in the event. The conditions in the stadium area and all the info to the festival-goers are essential to be well prepared. I was once at a massive concert in Britain, and I must say going out of the show was one of the scariest things. So I can imagine the Saturday was difficult for the audience: getting to hotels and homes from the stadium was really difficult.

And by the way, I really love ONEUS’s song, “LUNA“, from last year. It’s one of my favourite K-pop songs. It was sad that ONEUS couldn’t make it to the festival due to COVID-19, but this is the situation we live in. I was curious how the band would be live. They have just released their new EP called “Trickster”, and the title track is “Bring it on“.

After the concert, we hung out in Frankfurt on Monday, again in the city centre, and we did some shopping. There were a lot of lovely shops to buy clothes and shoes, so why not? The whole trip was delightful, and we had a fun time in Frankfurt! I’m planning already my next trip 😊

So as I mentioned, the May highlights -post is coming soon, and I’m actually making all the time music besides my day job, so there are quite a lot of things going on. I’m trying to juggle many things, but it’s fun and exciting. And writing these posts is fun, so I’m continuing to write here.

I hope you are doing great: I wish you health and happiness! Till the next time, bye 😊

At the K-POP.FLEX, Europe’s K-pop festival, Sunday, Frankfurt 2022 Part I